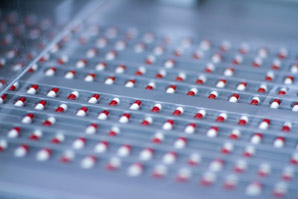 Imprinted surfaces made from inexpensive metal could offer a new way to make chiral pharmaceuticals and related compounds.

Many organic molecules are chiral, existing in two mirror-image forms called enantiomers. Many applications, especially pharmaceutics and cosmetics, require only one enantiomer. Chemists are constantly searching for efficient ways to generate one enantiomer over another.

Metal surfaces, grown in the presence of chiral molecule templates that leave chiral pockets imprinted into the metal, can act as catalysts that favour the formation of one enantiomer over the other. But these materials have been made from expensive precious metals.

Now, a team that included three researchers at Vidyasirimedhi Institute of Science and Technology has created a chiral imprinted catalytic surface from abundant, inexpensive nickel. The surface enantioselectively generated molecules containing a chiral alcohol group, a common motif found in many pharmaceuticals.