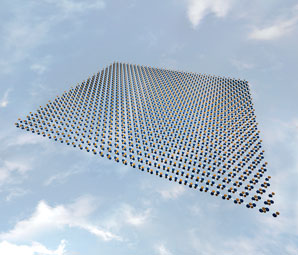 Thin films of lanthanum oxide (LaO) have been found to superconduct at higher temperatures than previously observed for other lanthanum-based compounds, bringing potential for producing new superconducting materials.

In 1980, lanthanum oxide was found to conduct electricity in the way metals do, but since then it has been largely forgotten about.

Scientists from the Advanced Institute for Materials Research have created single-crystal layers of rock-salt lanthanum oxide, so named because it resembles the structure of common salt, that superconduct at 5 kelvin. This is significantly higher than other lanthanum compounds, such as lanthanum selenide and lanthanum sulphide, which superconduct at temperatures below 1.5 kelvin.

The researchers plan to combine lanthanum oxide with other materials like europium oxide, which could lead to new superconductors for use in spintronic technologies.