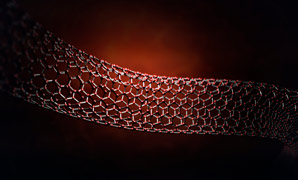 A new approach to fabricating printed electronic circuits could see them operated at powers so low that batteries become redundant.

Devices with ultralow power consumptions are needed for many emerging applications such as the Internet of Things. But it has been difficult to achieve such low powers using conventional approaches to printed electronics.

Now, a team that included researchers from Soochow University in China has demonstrated electronic circuits that could be powered by ambient light or the electromagnetic fields emitted by mobile phones or Wi-Fi routers. They used tiny cylinders of carbon to create thin-film transistors that operate at extremely low powers.

Importantly, printed electronics based on this approach are straightforward and inexpensive to fabricate.

The technology could led to battery-less devices that can be installed and then forgotten about.