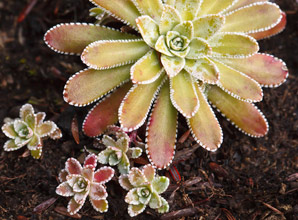 The mechanism by which tiny mineral spheres on the edges of leaves of some alpine plants redirect sunlight, boosting the light-harvesting ability of the plants, has been determined for the first time.

The mineral calcium carbonate occurs in various forms in nature. In several alpine plants belonging to the genus Saxifraga, it forms spheres that are several hundreds of nanometres across. Scientists have speculated that these spheres deflect light onto the leaves, but concrete evidence for this had been lacking.

Now, by performing spectroscopic measurements and numerical calculations, a team that included researchers at Peter the Great St. Petersburg Polytechnic University has revealed that the plants use an optical phenomenon known as the Kerker effect to channel more light to their leaves.

The researchers note that this strategy for enhancing light harvesting could be exploited in bioinspired photonic devices.