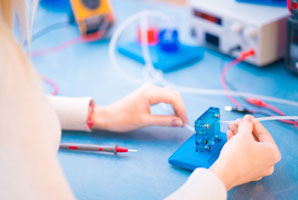 The polymeric membrane central to many electrochemical devices could be improved following a study investigating how protons pass through them.

Polymeric membranes are used in hydrogen fuel cells, the devices that were first used to power space probes, and are now of interest for hydrogen-powered cars. Fuel cells break apart hydrogen gas to release electrons and protons. The electrons power circuitry or an electric motor, while the protons cross the fuel cell to react with oxygen, and form water vapour. A proton-permeable membrane ensures proper fuel cell functioning by separating the hydrogen splitting and water- forming processes.

A team led by Deakin University researchers have used nuclear magnetic resonance to study how protons transfer across a new type of proton-permeable membrane called a polymeric ionic liquid. The study reveals the structural rearrangements around a key ammonium component of the membrane as a proton hops across it. The knowledge should lead to the development of polymeric ionic liquid membranes with improved electrochemical performance.