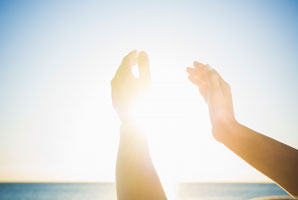 A sprinkling of nitrogen atoms is behind the record-breaking efficiency of a low cost solar cell created by a team led by researchers at the East China University of Science and Technology.

The team’s solar cell uses light-sensitive nanomaterials called quantum dots (QDs), which capture solar energy to generate electrons that are funnelled into an electric circuit to power a device or appliance.

But just as important as the cell’s light capturing layer is its ‘counter electrode’. This part of the solar cell completes the electrical circuit by collecting returning electrons once they have passed through a device.

So far, the most efficient QD solar cells have used a carbon counter electrode. The new work shows that adding small amounts of nitrogen to the carbon electrode slightly modifies its electrochemistry, enhancing its ability to pass returning electrons back into the solar cell. By incorporating nitrogen, the team boosted the cells’ efficiency from 11.6% to 12.1%, a new record for QD solar cells.