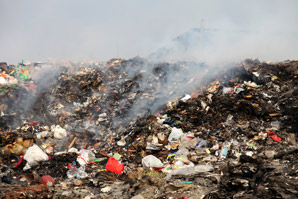 People living downwind of landfills or rubbish-burning sites could be exposed to antibiotic-resistance genes (ARGs) in the air.

Household waste harbours microbes that have become resistant to antibiotics found in discarded medicines, and these can spread ARGs to other bacteria in the mix. Some suspect that urban waste treatment may contribute to airborne ARGs, which could be problematic for people living nearby.

A team that included researchers from Nankai University in China collected air samples around a landfill and waste incinerator outside Changzhou, and screened them for ARGs. They identified 16 ARGs in the air that were also present in the waste itself. ARGs were more abundant downwind than upwind, suggesting that waste-treatment sites are an important source of them.

Prolonged exposure to airborne pathogens puts people at greater risk of respiratory diseases, and the presence of ARGs in the air could render medical treatment less effective.