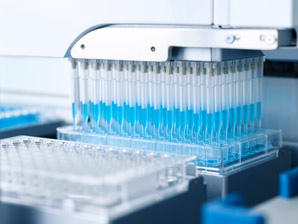 A simple way to fill pipettes whose openings are smaller than 10 nanometres in diameter has been demonstrated.

Pipettes are routinely used to collect liquid samples for analysis in laboratories. Nanopipettes, whose openings are smaller than 10 nanometres, allow sampling with very high spatial resolutions, making them invaluable for nanotechnology applications. But the high capillary forces at play at such small openings make it difficult to fill the pipettes with liquid.

Now, a team of four researchers at Kanazawa University in Japan has shown that this problem can be overcome by simply setting up a temperature gradient along the length of a nanopipette.

The team heated the opposite ends of nanopipettes to the tips to about 80 degrees Celsius and obtained time-lapsed microscopy images that showed that the tips were completely filled.