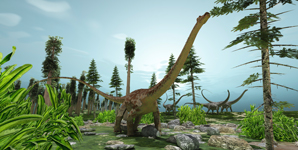 Dinosaurs were walking on all fours by the mid-Triassic, but the evolution of quadruped legs was just beginning.

The shift to quadrupedality allowed dinosaurs to reach epic proportions, and some sauropods —browsing herbivores that include the brontosaurus — exceeded 60 tonnes.

A team, which included researchers from the University of Cape Town, has described a new 12 tonne sauropod relative, Ledumahadi mafube, that roamed South Africa 200 million years ago. It was possibly one of the first quadrupeds to grow beyond 10 tonnes, and the biggest land animal of its time.

The researchers analysed the morphology of L. mafube’s limbs alongside those of other forms of sauropod to assess the evolution of posture in these four-legged leviathans of the land. They found that L. mafube and some early sauropods had partially flexed limbs, predating the column-like limbs that supported the latter giants.

The findings suggest that sauropod size did not depend on the evolution of columnar limbs.