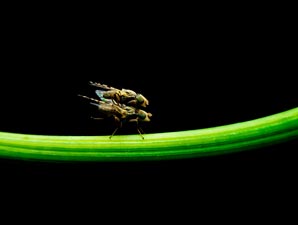 A cluster of neurons that control the intensity of male sexual behaviour in the brains of the common fruit fly has been identified by a China-US team including Zhejiang University researchers.

The team identified a cluster of neurons, the inferior posterior slope (IPS), in the fruit fly brain that produce and interact with the naturally-found molecule tyramine. Tyramine is a known building block of the behaviour-altering neurotransmitter octopamine, but, until now, there has been scant evidence of its independent effects on the brain.

When the scientists produced flies with ‘broken’ IPS tyramine receptors, the flies exhibited a significant increase in courtship activity, even in male-male interaction in the absence of female flies. It is now thought that tyramine and its receptor play an inhibitory role in sexual behaviour.

As tyramine is present in the brains of mammals as well as fruit flies, more research is warranted into whether it also performs behavioural functions in higher animals.