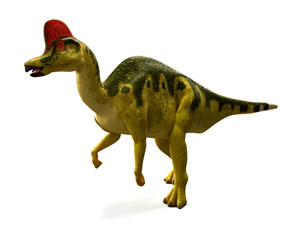 A wildebeest-like creature that roamed the plains of Africa some 75,000 years ago had an unusual facial feature never seen in other mammals and similar only to the duck-billed dinosaurs that lived tens of millions of years earlier.

A team from the United States and Australia that included a researcher from the City University of New York took CT scans of six intact skulls of juvenile and adult Rusingoryx atopocranion, a little-known long extinct hoofed mammal. They observed large, hollow nasal passages that may have helped these ancient wildebeest-like animals deepen their normal vocal calls.

The closest match they could find in the fossil record comes from hadrosaur dinosaurs, which had their own trumpet-like nasal crests that might have helped the herbivores communicate in the face of predatory danger.

The archaeological finding, the authors say, is an “outstanding example” of convergent evolution, in which unrelated organisms — in this case, mammals and dinosaurs — adapt to similar environments by developing corresponding traits.