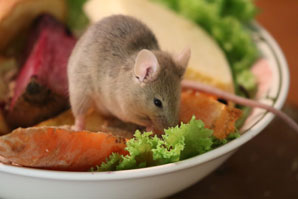 Brown fat relays a signal from the gut to the brain to let us know we are full.

When the body gets cold, it can generate heat without shivering by burning brown fat. Eating can also trigger the same response, but how and why had been unclear.

Now, a team that included researchers from the Technical University of Munich has discovered that brown fat cells have a lot of receptors for the gut hormone secretin, which is released when eating. The team injected hungry mice with secretin before feeding them, and found that they ate less than similarly starved mice injected with a placebo. Adding secretin also increased the heat produced by the mice’s brown fat cells, suggesting that the temperature rise is necessary for the brain to interpret the satiation signal.