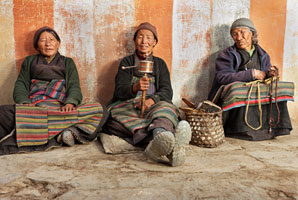 The ancestors of modern Tibetans colonized the freezing, high-altitude Tibetan Plateau up to 62,000 years ago, and even survived an ice age there.

An international team of researchers, including scientists from the University of Chinese Academy of Sciences, analyzed the genomes of 38 Tibetan highlanders and 39 Han Chinese lowlanders to solve a long-standing puzzle about the ancestry of modern Tibetans.

They found that around 6 per cent of Tibetan genetic material can be traced to Paleolithic and Neolithic early humans — Denisovans, Neanderthals and other unknown hominins — who mingled on the Tibetan Plateau 62,000–38,000 years ago, before the Last Glacial Maximum. The remaining 94 per cent is made up of modern contributions from East, Central and South Asia, western Eurasia and Oceania.

While this ‘human melting pot’ existed in Tibet long before the last Ice Age, the reason these prehistoric groups were drawn to such an inhospitable region remains a mystery.