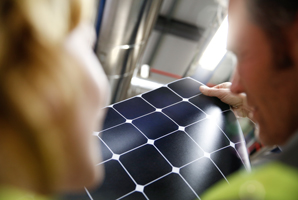 Plastic-based solar cells that are inexpensive and lightweight can now be fabricated in ways that reduce exposure to harmful solvents.

The thiadiazoles were combined with another polymer that is designed to absorb infrared light and then incorporated into nanoscale-thin films. Intriguingly, the new organic solar cells performed better when the conventional chlorinated liquids used to dissolve the polymers were replaced with less-toxic hydrocarbon alternatives.