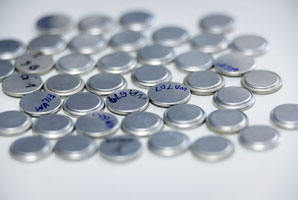 Bendy batteries could be made more durable by protecting vulnerable components in a flexible carbon frame.

Lithium-based batteries can hold a lot of power, but lithium crystals can grow inside the cell with detrimental effects. Bending the battery leads to more crystal growth and increases the likelihood of a short circuit.

A team including researchers from the Collaborative Innovation Center of Chemical Science and Engineering in Tianjin built an anode by combining lithium with graphene, a single layer of carbon atoms. The graphene provided a flexible frame that absorbed the stresses caused by bending and prevented the growth of lithium crystals. The team tested their anode in a battery and found that it lasted 1000 hours, whereas a cell made using a purely lithium anode short-circuited after just 200 hours.

Durable, bendy batteries could be used in wearable electronics and flexible solar cells that can withstand damage.