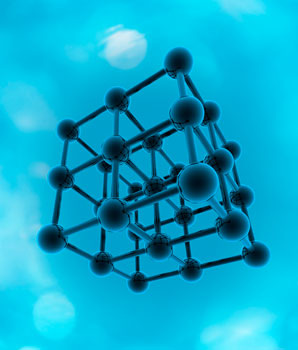 The fact that protons can hop quickly through a network of water-infused, glassy liquid crystals could open up new possibilities for more durable and safer batteries.

A team including researchers from the Tokyo University of Agriculture and Technology have developed a solid material that transfers positively charged protons rapidly through a thin web of water molecules. First, they built a three-dimensional structure by exposing zwitterions, electrically neutral molecules with both positively and negatively charged parts, to acid. This created ionic pairs between the zwitterions and acid, driving them to self-align like liquid crystals into a cubic structure, which was then cooled to a solid, or ‘glassy’, state. Dispersing water molecules through this scaffold-like material created a continuous web of hydrogen bonds through which protons could hop freely. The authors observed that the addition of water caused a six-fold increase in proton conductivity.

Improving electrolytes is one of the key barriers to affordable and longer-lived batteries. This approach could open up a new avenue for designing high-performance solid electrolytes, the authors suggest.