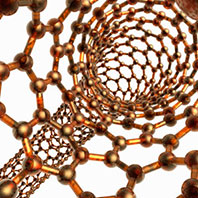 Supercapacitors are electricity storage devices that generate short bursts of power thanks to their fast charge-discharge capability. Some cars use them to capture and store energy during braking, that they can later use to restart the engine. Increasing their regenerative powers could reduce fuel consumption even further.

Researchers at the Tokyo University of Agriculture and Technology and their colleagues created a hybrid electrode for supercapacitors by enriching a carbon nanotube with nanocrystals of a titanium dioxide and bronze compound. The crystals were uniformly spread across the inner nanotube walls via a rapid spinning process and their size was restricted by a hot water treatment. These features, combined with the high conductivity of bronze, enables the ultrafast flow of electrically charged lithium ions through the fuel cell to deliver high power quickly.

The team’s hybrid electrode retained its excellent power capability over 300 charge-discharge cycles and could inspire the next generation of high-energy supercapacitors.