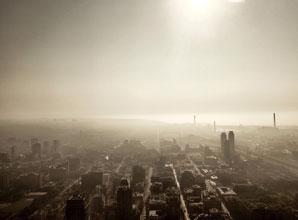 An excess of aerosols above China’s capital can often enshroud the city in smog, reducing visibility and air quality. To clear the air for the 2014 APEC summit held between November 5 – 11, China prohibited many polluting activities in and around Beijing for one week. Factories closed, driving was restricted and ceremonial fires were banned.

A team including researchers at the Key Laboratory of Aerosol Chemistry and Physics analysed levels of particulate matter (PM2.5) — potentially hazardous airborne particles less than 2.5 micrometres in diameter — and light-extinction by a range of aerosols measured between 28 October and 6 December 2014. They found that PM2.5 concentrations fell by 40 per cent during the summit compared to the weeks either side, and light-extinction by aerosols from coal-burning and traffic decreased by 87 and 78 per cent, respectively.

These findings suggest that the temporary emissions embargo could guide a strategy for improving air quality in Beijing.