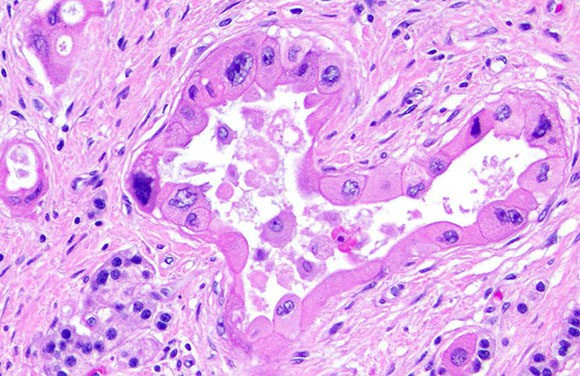 Neoplastic diseases of the pancreas and the biliary tract share numerous common features regarding their morphology, immunohistochemical profile and molecular driver events. In the last few years, numerous efforts have been made towards standardization of the diagnostic approach to these malignancies and exploration of their biologically relevant pathomechanisms, such as the interaction with the microenvironment. In addition, the integration of immunophenotypical and molecular data into the classical histomorphological approach has led to the definition of new entities and to a clear-cut and more clinically relevant classification of the already known ones.

In this virtual issue we highlight papers from Modern Pathology and Virchows Archiv which deal with the most recent developments in molecular pathogenesis, classification, and diagnosis of pancreatobiliary neoplasms.

Pancreatic cancer arising in the remnant pancreas is not always a relapse of the preceding primary. Luchini, C., Pea, A., Yu, J., et al.