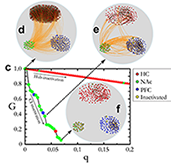 Brain networks can be understood and studied as complex networks. Here the authors identify the essential nodes in a model of a brain network and then validate these predictions by means of in vivo pharmacogenetic interventions. They find that the nucleus accumbens is a central region for brain integration. 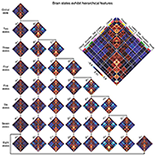 Temporal changes in brain dynamics are linked with cognitive abilities, but neither their stability nor relationship to psychosis is clear. Here, authors describe the dynamic neural architecture in healthy controls and patients with psychosis and find that they are stable over time and can predict psychotic symptoms.

Previous work decoding linguistic meaning from imaging data has generally been limited to a small number of semantic categories. Here, authors show that a decoder trained on neuroimaging data of single concepts sampling the semantic space can robustly decode meanings of semantically diverse new sentences with topics not encountered during training.

Approaches describing how the brain changes to accomplish cognitive tasks tend to rely on collapsed data. Here, authors present a new approach that maintains high dimensionality and use it to describe individual differences in how brain activity is represented and organized across different cognitive  tasks.

Human brain development is characterized by an increased control of neural activity, but how this happens is not well understood. Here, authors show that white matter connectivity in 882 youth, aged 8-22, becomes increasingly specialized locally and is optimized for network control.

Resting-state functional connections have been associated with cognitive abilities but it is unclear how these connections contribute to cognition. Here Ito et al present a new approach, information transfer mapping, showing that task-relevant information can be predicted by estimated activity flow through resting-state networks.

Cities and societies are often arranged according to topological networks, yet despite their importance, it is unclear how the brain processes such topological information to guide future decisions. Here, Javadi et al. use functional magnetic resonance imaging on participants who navigate a simulation of London and show that hippocampal activity is modulated by the characteristics and number of new streets, while prefrontal activity relates to planning the future route. 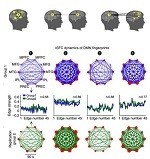 Default mode network (DMN) activity in the human brain is thought to reflect resting state activity in absence of external stimuli, but it was not known whether it encodes information about changes in the environment as well. Here, the authors devise a method called inter-subject functional correlation, and apply it to data generated by having people listen to real-life auditory narratives while undergoing functional magnetic resonance imaging (fMRI). They show that the strength of DMN coupling predicts memory of narrative segments, thereby linking resting state network dynamics to stimulus features. 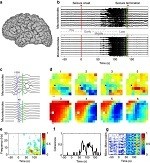 Epileptic seizures span spatial and temporal scales making it difficult to understand the mechanism by which they manifest and spread. Here, the authors record both local and long-range neural activity during human epileptic seizures to study the underlying multi-scale dynamics. They find that the coupling of activity across spatial scales increases during seizures through propagating waves that are fit by a model combining neural activity and potassium concentration dynamics.

Interareal connectomes are whole-brain wiring diagrams of white-matter pathways. Modules, hubs and their associated hierarchies are the structural hallmarks of such connectomes. This network structure has been postulated to be constrained by wiring-cost minimization. In this manuscript the author describes the interdependences between structural features for various established connectomes through network models. He shows that module hierarchy and rich club features in these networks are not in fact constrained by wiring cost, but rather arise as structural byproducts (spandrels) of simultaneous module and hub constraints.

Neurons in the medial temporal lobe change their firing patterns as people learn to pair items together, yet it is unclear if this pairing lasts, and if it does, how these long-term associations are encoded in the human brain. Here, authors use the participants' own ratings of how closely two items are associated as well as a web-based metric to show that single neurons in the medial temporal lobe tend to respond similarly to items that are closely conceptually related. Moreover, they show that the degree to which two concepts were related can be predicted by the neurons' response patterns.

Cognitive control is fundamental to human intelligence, yet the principles constraining the neural dynamics of cognitive control remain elusive. Here the authors use network control theory to explain the mechanism that lets the brain move between cognitive states. Their results demonstrate that the structure of brain networks dictates their distinct functional roles in controlling the trajectories of brain network function.