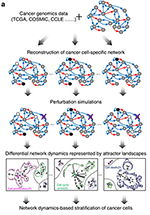 Genomic alterations underlie the variability of drug responses between cancers, but our mechanistic understanding is limited. Here the authors use the p53 network to study how rewiring of signalling networks by genomic alterations impact their dynamic response to pharmacological perturbation.

Cancer is caused by accumulating genetic mutations, but their global interactions are poorly understood. Here, the authors investigate the cooperative effect of these mutations in colorectal cancer patients and identify a giant cluster of mutation-propagating modules that undergoes percolation transition from small, scattered modules to a large connected cluster during tumourigenesis.

How pathogens maintain phenotypic robustness during infection is poorly understood. Here the authors couple the virulence regulatory network (VRN) of the plant pathogen R. solanacearum to a model of its metabolic network, and find that the VRN activates functionally redundant primary metabolism genes to promote phenotypic robustness during infection.

Network-based data integration for drug-target prediction is a promising avenue for drug repositioning, but performance is wanting. Here, the authors introduce DTINet, whose performance is enhanced in the face of noisy, incomplete and high-dimensional biological data by learning low-dimensional vector representations.

Interaction of a drug with its target protein initiates a perturbation that cascades through the interactome, but this systemic effect is rarely considered in attempts of predicting novel uses of drugs. Here, the authors introduce a measure of drug-disease proximity on the interactome, enabling drug efficacy prediction based on the distance of a drug’s target from the neighborhood in the network that is perturbed in each disease.

Highly connected nodes in protein-protein interaction networks play essential roles in organismal function. Here, the authors show that it is the proteins with high centrality in the interface of the Y. pestis interacome and that of its host, rather than the pathogen's own protein network, that are most important for pathogen fitness during infection, and highlight the importance of pathogen proteins that likely cause significant perturbation of the interactome of the host.

The rat is a widely used model for human biology, but we must be aware of metabolic differences to judge when it is a good one. Here, the authors reconstruct the genome-scale metabolic network of the rat and reconcile it with an improved human metabolic model. The power of the models to integrate toxicogenomics data is demonstrated by providing species-specific biomarker predictions in response to a panel of drugs.

Complex networks with nonlinear dynamics and multiple stable states, including physical, biological and social systems are ubiquitous, and our ability to control them crucially depends on understanding of how perturbations affects their global dynamics. Here, Wang et al. develop a framework based on the concept of attractor networks to quantify and facilitate the study of controllability of nonlinear dynamics in complex systems. The utility of the framework is demonstrated by finding perturbations that could drive cancerous cell states back to normal states. 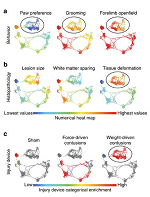