Sea-level rise, one of the first identified impacts of climate change, poses a serious risk to a large part of the world’s population who live in coastal areas. There is a pressing need to understand the physical processes driving sea-level rise and coastal inundation to improve projections and provide the best available information to decision makers to inform impact assessments and adaptive management strategies.

This is a vigorous and dynamic field of research and our scientific understanding of the drivers, impacts and future projections has greatly improved since the last report from the Intergovernmental Panel on Climate Change (IPCC) in 2014. With the next IPCC report not due until 2021, scientists and policymakers alike need to keep abreast of these rapid developments. In order to support that process, this collection brings together important, open-access research in sea-level rise published in Nature Communications since the last IPCC report.

This collection has been curated by the Earth science editorial team at Nature Communications and will be updated with new research on a regular basis. The collection is divided into three research areas, observations and drivers of sea-level variability, ice sheet dynamics and their contribution to sea-level rise, and coastal vulnerability to rising sea levels. We hope that the collection proves to be a useful resource for researchers and decision makers who need to manage the high scientific output currently being published. This section highlights research that examines the dynamics of the Antarctic and Greenland ice sheets to better understand their potential contribution to future sea-level rise. These studies examine the processes that drive ice sheet melting and instability in past, present or future climates.

Ice core data show a breakdown in the long-term temperature-atmospheric CO2 correlation during interglacial-glacial transitions. Here, via a novel modelling approach, the authors reveal marine volcanism, triggered by a fall in sea level, as a likely mechanism for the observed delayed decline in atmospheric CO2.

The reason some of the Earth’s tidewater glaciers are advancing despite increasing temperatures is not entirely clear. Here, using a numerical model that simulates both ice and sediment dynamics, the authors show that internal dynamics drive glacier variability independent of climate. 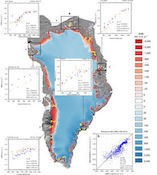 Mass loss from the Greenland ice sheet, its surrounding glaciers and ice caps, presently contributes around 43% to contemporary sea-level rise, yet the fundamental trigger remains unclear. Here, Noёl et al. analyse a novel surface mass balance product at 1 km resolution for the period 1958-2015 and identify the year 1997 as a tipping point with a rapid deterioration of the refreezing capacity of inland snow, as a threshold for causing long-term mass loss.

Evidence for the stability of the West Antarctic Ice Sheet divide for 1.4 million years 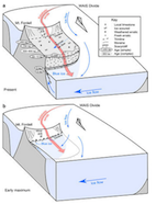 Whether the West Antarctic Ice Sheet remained intact as a regional ice sheet, or as isolated mountain glaciers during past periods of warmth remains uncertain. Here, based on geomorphological evidence from and cosmogenic dating of Ellsworth Mountains’ deposits, the authors show that at the least a regional ice sheet survived Pleistocene interglacial cycles, possibly constraining WAIS sea-level contributions during interglacials to 3.3 m above present. 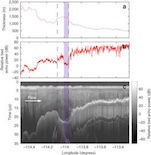 The intrusion of warm, salty Circumpolar Deep Water into submarine ice-shelf cavities is thought to control ice loss in the Amundsen Sea embayment, yet the magnitude of the effect remains poorly quantified. Here, Khazendar et al. analyse radar observations of the Dotson and Crosson ice shelves collected during NASA’s Operation IceBridge, and report intense unbalanced melting of 300-490 m of ice between 2002 and 2009.

Clouds can exert both a warming and cooling effect on the surface of the Greenland ice sheet, yet the sign of the overall effect is dependent on the clouds’ physical and optical properties, and our understanding of which is limited by a paucity of measurements. Here, using a unique combination of satellite observations, climate model data and snow model simulations, Van Tricht et al. show clouds enhance Greenland ice sheet meltwater runoff by more than 30%. 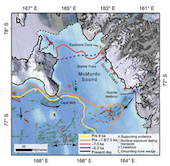 Satellite observations suggest parts of the East Antarctic Ice Sheet are experiencing dynamic thinning, which could potentially destabilize outlet glaciers and result in irreversible ice loss. However, such behaviour has not been observed in the geological record. Here, Jones et al. combine surface-exposure ages and model simulations to show rapid glacier thinning of East Antarctica’s Mackay Glacier occurred 7,000 years ago, providing geological precedent for this behaviour. 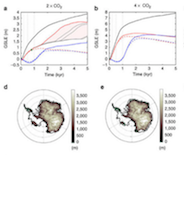 In the long-term, the retreat of marine-based ice sheets in Antarctic will contribute to global sea-level rise, yet in the short-term, post-glacial rebound and reduced gravitational pull lowers sea-level locally, stabilizing the retreat.  Here, Gomez and colleagues use a coupled ice sheet – sea-level model to investigate the extent of this stabilizing effect under a wide range of future emission scenarios and reveal stabilization is greatest for low emission scenarios. 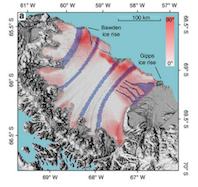 Recent dynamic and mass changes of Larsen C ice shelf on the Antarctic Peninsula have raised concerns regarding its future stability and suggestions it may follow the same fate as its collapsed cousin Larsen B. Here, Kulessa et al. use a validated ice-sheet model, constrained by satellite and in situ geophysical data to investigate the balance of stresses within the ice shelf, and reveal that marine ice-bearing suture zones are presently stabilizing the ice shelf. 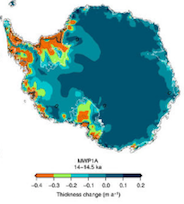 Understanding the extent to which the melting of Antarctic ice sheets contributed to rising sea-levels at the end of the last ice age will provide an important context for future sea-level variability. Here, Golledge et al. present a suite of data-constrained ice-sheet modelling experiments and conclude that the retreating ice sheets of Antarctica may have contributed as much as 0.7 m per century to meltwater pulse 1A, a rapid rise in post-glacial sea level.