Black holes from prediction to detection

On 14 September 2015, the LIGO/VIRGO instruments detected the first statistically significant signal of a gravitational wave passing through Earth, one hundred years after the publication of the theory of General Relativity. The signal was identified as originating from the merger of two stellar black holes orbiting each other. Black holes, since their theoretical conception from Albert Einstein and Karl Schwarzschild, have played an integral role both in theoretical physics and later on in astronomy and astrophysics.

Currently, black holes are thought to be important, both as probes of the most extreme regime of gravity, but also as regulators of their environments both on stellar and galactic scales. Nature journals have published key results relating to black holes, including some of the most highly cited papers in astronomy. This collection showcases the presence of black holes in scientific research over the last 50 years and the evolution of our understanding of black holes in astronomy and astrophysics.

In the News, Views and Comments tab, you will find the reaction of the community to what today is considered rather commonplace knowledge. What would happen if one lowers a rope with a mass tied to its end inside a black hole? Why is the detection of gravitational waves such an important breakthrough? Click through to find more.

In the Theory and Predictions tab, you will find papers that have dealt with black holes on a theoretical level, making predictions about both the observational signatures of black holes and the properties of the black holes themselves. Despite their blackness, black holes power some of the most luminous objects in our Universe through the accretion of matter and the gravitational release of energy.

Black holes come in all sizes (and potentially shapes). In the Quantum to stellar black holes tab, we take a closer look at black holes with small masses (up to a few hundred or thousand solar masses). These can be found scattered around galaxies, the end product of stellar evolution, and even presumably in the primordial Universe, products of quantum fluctuations and extremely high-energy processes. Despite having been theoretically predicted several years before, it was only in 2011 that a clear signature of a star being tidally disrupted by a supermassive black hole was directly observed. David Burrows et al. reported a galaxy that experienced a bright flare in the X-rays, which saw its brightness increase by at least four orders of magnitude. The X-ray flare was accompanied by a similar brightening at radio wavelengths. Unlike any other high-energy transient, the properties of this source pointed to a tidal disruption event that led to the onset of a relativistic jet pointing towards us. Tidal disruption events are currently at the centre of astrophysical research as probes for black hole demographics.  Image Credit: NASA, S. Gezari (The Johns Hopkins University), and J. Guillochon (University of California, Santa Cruz) 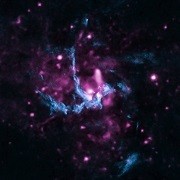 While the presence of black holes at the centres of quasars had been argued for some time, the same could not be said for normal galaxies like our own, the Milky Way. In this News & Views, John Maddox discussed results from radio interferometric observations that showed with unprecedented precision the very small diameter of the radio source residing at the centre of the Milky Way. The size and the flux of the source could only be plausibly explained as a dormant black hole. While this idea was definitely not common knowledge, the idea of a black hole at the centre of our galaxy has been floating around for some time by the time of these measurements. The final confirmation would come several years later. Image credit: X-ray: NASA/UMass/D.Wang et al., IR: NASA/STScI 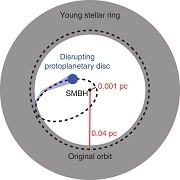 The centre of our own galaxy, the Milky Way, harbours the closest supermassive black hole (>106 solar masses) to us. This makes for a unique laboratory where we can study the properties and behaviour of stars and gas in this extreme gravitational field. Ruth Murray-Clay and Abraham Loeb used the observations of a gas cloud being accreted onto this supermassive black hole to argue that in fact the gas is coming from a proto-planetary disk that is being tidally disrupted by the black hole. This disk was formed around a young star that was ejected from a ring of young stars near the centre of the Milky Way. Their model showed that planets can be created in these extreme conditions and their disruption provides the necessary light for us to observe these otherwise very faint systems.

From masses comparable to the Planck energy to several billion times the mass of our Sun, black holes come in all sizes. However, our observations have revealed a prominent gap in the mass ladder. Black holes of a thousand to a few hundred thousand solar masses are conspicuously missing. These intermediate-mass black holes should be the logical step in the evolution of a stellar-mass black hole to the supermassive black holes observed at the centres of galaxies. Jenny Greene consolidates our knowledge of these elusive systems and identifies both the potential sites of these black holes as well as future prospects for detecting them. Despite significant boosts to our observational capabilities, the detection of a population of intermediate-mass black holes is still an open issue in astronomy.

Mitchell Begelman, Roger Blandford and Martin Rees had a revolutionary idea that only came to be observationally confirmed much later. If quasars are powered by supermassive black holes at their centres, then it is only to be expected that some quasars could host systems of two (or more) supermassive black holes. The orbital properties and evolution of such a binary configuration were analytically derived by the authors and the conditions under which this binary can merge were explored. Remarkably, this prediction was used to explain the peculiar morphologies that had been observed for radio jets associated with active galaxies. Today, radio jets are some of the most useful tools for binary black hole systems in very close (<<1 kpc) orbits to be identified. Image credit: NASA