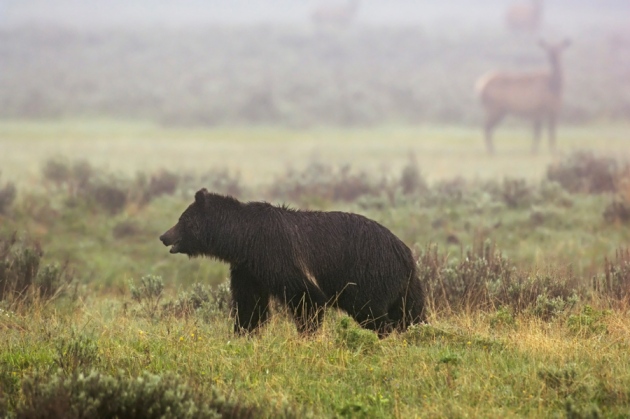 For the US government, the grizzly bears of Yellowstone National Park in Wyoming embody a stunning success story: a population resurgent after 40 years of protection under the Endangered Species Act. More than 700 bears now roam the region, up from 136 in 1975, when the grizzly (Ursos arctos horribilis) was listed as threatened after decades of deadly clashes with ranchers, hunters and park visitors. But the US Fish and Wildlife Service is now expected to lift the legal safeguards, after a government advisory panel of wildlife officials endorsed delisting the bear last month.

Conservation groups have pushed back, saying that the government has under­estimated the threat that climate change poses to the bears’ food supply, especially stands of whitebark pine. As the Yellowstone region has warmed, mountain pine beetles and blister rust fungus — once thwarted by the cold, dry climate — have devastated the trees, depriving grizzlies of energy-rich pine nuts. Moreover, say conservationists, invasive fish have crowded out native cutthroat trout in Yellowstone Lake at the heart of the park, reducing another important food source for the bears.

“We have an unprecedented situation with deteriorating foods, and an ecosystem that is unravelling,” says Louisa Willcox, the Northern Rockies representative at the Center for Biological Diversity in Livingston, Montana. The centre was one of several groups that sued the US government in 2007, following an earlier attempt to delist the bear. After two years, a district-court judge restored protection, citing concerns about the declining whitebark pine and its effect on the bears’ diet.

A report delivered in November by the US Geological Survey’s Interagency Grizzly Bear Study Team describes a resilient and healthy bear population that has adapted to the loss of pine nuts by eating more elk and bison, keeping fat stores at levels that allow the bears to survive and reproduce. For Christopher Servheen, a biologist who oversees grizzly-bear recovery efforts at the Fish and Wildlife Service in Missoula, Montana, that is not surprising. “Bears are flexible,” he says. “It’s easier to say what they don’t eat than what they do eat.” 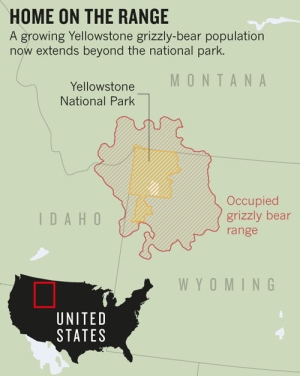 But other researchers suspect that the change carries a steep price. “Eating meat is hazardous on all fronts,” says David Mattson, an ecologist at Yale University in New Haven, Connecticut. A reliance on meat heightens the risk that adult bears will come into contact with humans, including livestock owners and hunters seeking elk, he says. For young bears, it may increase the frequency of potentially deadly interactions with aggressive adult male bears and wolves.

Critics also argue that the government is basing its decisions on flawed population estimates. A study published last July suggests that the government’s figure of 741 bears is inflated (D. F. Doak and K. Cutler Conserv. Lett. http://doi.org/q3d; 2013). The number of survey flights used to count bears has tripled since the mid-1990s, but, the study argues, the model used to extrapolate population figures from the flights’ tallies does not account for increased observation time. Further distortion may arise because the model assumes that female bears will reproduce consistently throughout their 30-year lives, with no decrease in fertilityas they age.

Mattson says that population estimates have in the past jumped by more than 100 bears when the statistical method has shifted. “There is no clean and simple way to estimate the size and trend of the Yellowstone population,” he says.

But those criticisms are rejected by Frank van Manen, a wildlife biologist with the US Geological Survey in Bozeman, Montana, who led the diet study. Observation time has increased, he says, but so has the grizzly bears’ range (see ‘Home on the range’), which cancels out any observer bias from increased search hours. And although the govern­ment’s official estimate of the population did jump from 629 to 741 bears this year, van Manen says that the new number is better. That is in part because the revision takes into account a 2011 demographic study of bear survival rates based on radio-collar tracking data — the first such study since 2002 — that gives biologists more confidence in their population surveys.

Servheen says that if the government were to decide to pursue de­listing, as many expect, the decision would not be announced until late spring at the earliest. At that point, the Fish and Wildlife Service would open a 60-day public-comment period to seek reaction.

But even that is unlikely to be the last word on the grizzlies: conservation groups are already gearing up to sue. Perhaps the only point on which the US government and its opponents agree is that there will be more legal wrangling over the Yellowstone bears’ future. “It’s sad that it’s come to this,” says Servheen. “What it should be is a celebration.”