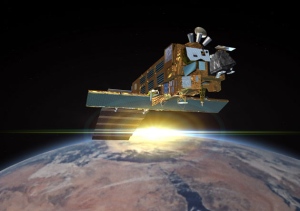 Envisat has gathered environmental data for the past ten years.

Officials with the European Space Agency (ESA) say that they have lost contact with Envisat, their premier Earth-observing satellite.

Launched in 2002, the satellite is billed as the most sophisticated environmental monitor in orbit, with ten instruments providing streams of valuable data on everything from ozone, clouds and greenhouse gases to land-use trends and sea-surface temperatures — data that have figured in more than 2,000 scientific publications, ESA says. Over the years, Envisat has also offered a unique vantage point on major environmental disasters such as the December 2004 earthquake and tsunami in southeast Asia and the Deepwater Horizon oil spill in the Gulf of Mexico in 2010. Now, scientists fear that the satellite's decade-long run has come to an abrupt end.

Problems began on 8 April when the satellite's signal cut out as it was passing over a ground station in Sweden. ESA has been working with a team of scientists and engineers to diagnose the problem and to re-establish contact, but the outlook remains unclear. Officials say that the satellite remains in stable orbit around Earth.

“The silence of Envisat puts another knot in my stomach,” says Inez Fung, an atmospheric scientist at the University of California, Berkeley, who worked on NASA’s failed Orbiting Carbon Observatory (OCO) before it plummeted into the ocean upon launch in 2009. Envisat has provided a limited capacity for monitoring carbon dioxide in the atmosphere in the absence of the OCO, and Fung says that its loss would represent yet another setback for scientists tracking a host of climate data.

Envisat provided scientists with important information about the vertical profile of ozone in the atmosphere, and its loss could help to contribute to a gap in monitoring that has been looming for some time, says Neil Harris, an atmospheric chemist and head of the European Ozone Research Coordinating Unit at the University of Cambridge, UK. “If the Envisat problem is not fixed,” Harris says, “then this critical period will be quite a bit longer than we would have liked.”

The satellite has already doubled its five-year design life, and most of its instruments have some kind of analogue on other satellites. But ESA was hoping to maintain Envisat long enough to overlap with the new Sentinel satellite series flying under the Global Monitoring for Environment and Security (GMES) programme. GMES head Josef Aschbacher says that the programme is scheduled to begin operations as early as 2013–14, although funding for it is now in doubt.

Aschbacher says that although the programme is funded through 2014, long-term commitments are under negotiation among the European Union Council, Parliament and Commission. This funding, expected to be finalized by the end of 2013, is necessary before any satellites can be launched.

“If these negotiations are not successful, it could lead to launch delays and therefore additional costs,” Aschbacher says. “However, an eventual loss of Envisat puts increased pressure on getting the Sentinels launched as early as possible.”

Fung says that Envisat’s loss would be a troublesome reminder of what is shaping up to be a broad loss of satellite-monitoring capacity over the coming decade, caused by a perfect storm of ageing spacecraft, scheduling delays and generally tight budgets. “How will we meet societal needs with fewer and fewer eyes in the sky?”