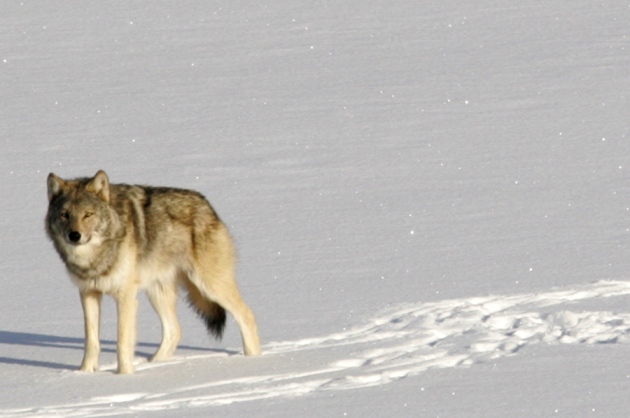 The longest-running predator–prey study in the world may run out of predators as early as next year. Isle Royale is down to its last three wolves, researchers announced on 17 April.

Scientists have chronicled the fluctuating populations of moose and wolves on the 544-square-kilometre island in Lake Superior for 57 years, teasing out the forces behind the ups and downs and evaluating the degree to which the carnivores control the system.

In cold winters, ice bridges form to the mainland, which can allow new wolves — and their genes — to join the population. But the last influx of DNA came with a lone male in 1997, and researchers say that inbreeding has taken its toll on the wolf population, causing skeletal abnormalities and high mortality rates. An ice bridge that formed in 2014 worsened the situation, serving as an escape route for at least three wolves.

A decade ago, 30 wolves roamed the island — which is also a US national park — in several packs. Last year’s official winter count was nine. For years, project leaders Rolf Peterson and John Vucetich, both ecologists at Michigan Technological University in Houghton, called for a 'genetic rescue'. By transporting just a few fresh wolves onto the island, they argue, problems such as malformed spinal columns, caused by recessive genes, would be masked by the incoming dominant genes.

The researchers hoped to save both the study and the island's forest. As wolf numbers have declined, moose numbers have increased by about 22% per year, from some 500 in 2011 to 1,250 now. If the wolves disappear, the researchers say, the moose are likely to nibble the Isle Royale landscape into a steppe dotted by spruce, the only type of tree there that the animals do not eat.

This year, Peterson and Vucetich worked on Isle Royale for 32 days, and flew above the island for 16 days in February and March looking for wolves and wolf tracks in the snow. Most days they came up with nothing. “Just a blank slate,” says Peterson. In the end, they counted just three wolves — probably a mated pair of close adult relatives and one pup.

Even if new wolves were brought in this year, the pair probably would not break up and mate with the newcomers, the researchers say. And the pup was in such poor shape that the scientists do not expect it to survive. “Genetic rescue is almost certainly too late now,” says Vucetich.

Peterson and Vucetich blame the US National Park Service (NPS) for what Peterson calls “dithering” over what to do until the window for genetic rescue closed. They say that they have made a case for the intervention, to no avail, for the past six years. A year ago, the NPS announced that it would make a decision on the matter after a “comprehensive planning process”.

“We have science coming out our ears and it wasn’t enough to carry the day against an entrenched bureaucracy with a culture of non-intervention,” says Peterson.

But Phyllis Green, superintendent of Isle Royale National Park says that science is just one of several factors that will influence her decision about whether to intervene, along with NPS policies, relevant laws and the needs and desires of park visitors. "Some people love hearing a wolf howl in the wilderness; others say 'if you put the wolf out there, I am not as thrilled about hearing it,” she says.

And not everyone agrees that the NPS should have added more wolves to the island. Prominent wolf biologist David Mech, who works for the US Geological Survey in St Paul, Minnesota, says that much can be learned from watching what happens without intervention. “Chances are good that one [of the remaining wolves] is a male and one is a female, and that is how the whole population started, so it would be interesting to see what happens in the next year,” he says. “I think we should just continue to study the situation and describe what happens.”

In March, the US National Science Foundation renewed the grant for the Isle Royale study for another five years, and that US$90,000 is not contingent on wolves remaining in the system. Moose and vegetation can still be tracked as they react to the disappearance of the predator. The researchers say that they will stay. Vucetich has been working on the study since the early 1990s, and Peterson has been looking for wolf tracks in the snow every winter since 1971. “They can kick me out if they want,” Peterson says, “but I won’t walk away.”