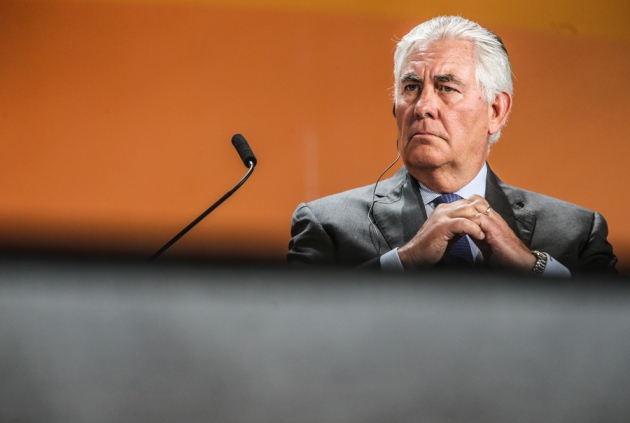 During Rex Tillerson's tenure, ExxonMobil has shifted its stance on climate change.

President-elect Donald Trump has selected Rex Tillerson, chief executive of oil giant Exxon Mobil, to represent the United States abroad as secretary of state — which would make him the United States' top emissary on climate change.

Tillerson took the helm of ExxonMobil, the world’s largest publicly owned oil company, in 2006. He has earned a reputation as an astute businessman, negotiating deals to advance oil and gas exploration around the world.

As secretary of state, Tillerson would be likely to take a lead role in carrying out Trump’s pledge to pull the country out of the Paris climate accord. But first he must win Senate confirmation, which could be a tricky task given that some lawmakers — including top Senate Republicans — have raised concerns over his business dealings with Russia.

ExxonMobil’s relationship with global warming is complicated and controversial. In the past, the company has funded climate sceptics and organizations that lobby against climate regulation. It is currently under investigation by New York and other states for misleading investors about the risks that climate regulation pose to its business model.

But ExxonMobil has softened its opposition to climate policies under Tillerson. The company publicly endorsed the 2015 Paris climate agreement and has long favoured a carbon tax. This suggests that Tillerson is more progressive than others in Trump’s inner circle: Scott Pruitt, nominated to lead the US Environmental Protection Agency, does not acknowledge mainstream climate science.

“President-elect Trump is creating a government of, by, and for the oil and gas industry,” said Ken Kimmell, the president of the Union of Concerned Scientists, an advocacy group in Cambridge, Massachusetts. “Never before have we seen such a concentration of extreme wealth and privilege in a single cabinet.”

Although some environmentalists lampooned Trump’s choice of Tillerson, others took a more cautious stance.

“While the company has recently acknowledged the human role in climate change and declared support for the Paris Agreement, Tillerson would need to go much further” as secretary of state, said Andrew Steer, president of the World Resources Institute, a think-tank in Washington DC, in a statement. “One of the critical tests at his confirmation hearings must be his demonstration of a true commitment to America’s leadership on climate action.”

And some see Tillerson as a potentially positive force on climate issues within the Trump administration. The climate agenda will certainly take a hit under Trump, "but frankly I don't think it will be completely disregarded”, says John Deutch, a chemist at the Massachusetts Institute of Technology in Cambridge and former director of the Central Intelligence Agency under President Bill Clinton. "I would speculate that Rex Tillerson, if he becomes secretary of state, would be more on the side of doing something than doing nothing."

Still, over the past year, ExxonMobil’s sponsorship of the American Geophysical Union (AGU) has also sparked controversy. Many scientists argued that the AGU should reject the company’s funding, noting ExxonMobil’s history of funding climate sceptics. The AGU declined to do so, but in November the society announced that ExxonMobil had withdrawn its funding. In 2015 that support had been US$35,000 for a student breakfast at the organization's annual meeting.

AGU president Margaret Leinen defended her organization’s decisions during a session at the AGU Fall Meeting in San Francisco on 12 December. She said the AGU board had investigated and determined that in the most recent year studied, ExxonMobil has given more money to support climate-change research than to organizations that would seek to undermine that research.

This explanation failed to appease critics. Naomi Oreskes, a historian of science at Harvard University in Cambridge, Massachusetts, pointed out that the tobacco industry funded 'good' things — such as hospitals and cancer-treatment centres — at the same time that it supported researchers who denied a link between smoking and disease. "That's how these organizations operate — they buy our goodwill,” Oreskes said at the meeting. "What you just told us confirms that the ExxonMobil strategy is the tobacco strategy."