Michael Eisen has long argued that research papers should be judged on the basis of their content, not on which journal they were published in. On 6 December, Eisen — a biologist at the University of California, Berkeley, and co-founder of the open-access publisher PLOS — decided to prove his point. He revamped his laboratory’s website and announced on Twitter:

A few other scientists followed suit, and one even went a step further. Plant geneticist Jeffrey Ross-Ibarra at the University of California, Davis, tweeted:

Others were sceptical. Manolis Dermitzakis, a geneticist at the University of Geneva, Switzerland, posted:

Eisen’s move is part of a broader push to assess papers on their own merits. “We have become far too reliant on journal names as a means to evaluate science and scientists,” Eisen said in an interview. After writing about this issue for so long, he “felt it was important to demonstrate to people that I meant it”. “If everyone hid journal names from their CVs and grant applications, it would go a long way.”

Neuroscientist Dennis Eckmeier at the Champalimaud Foundation in Lisbon also removed journal names from his personal website, saying, “I want to nudge readers to read the titles of my publications, because it actually has some information about the paper, whereas the journal name doesn’t.”

But Claus Wilke, an integrative biologist at the University of Texas at Austin, wrote in a blog post that omitting journal names is counterproductive. “Hiding journal names from the publication list is directly at odds with the principles of openness and egalitarianism that people like Michael Eisen so strongly promote,” he wrote.

Wilke argued that a better way to show that the journal doesn’t matter is to publish in less selective journals, or avoid them altogether and post papers on a preprint server such as bioRxiv. “If you’re hiding the journal names from your website, this important message is not conveyed,” he wrote.

Eisen says that he understands Wilke’s arguments, but adds that his aim was mainly to get people to think differently when looking at a publication list. He and his lab are already changing where they publish. “Our last paper went to F1000 Research, a journal where peer review is completely post-publication,” he says, adding that he hopes to convince his team to publish all of its papers in such venues.

Lenny Teytelman, co-founder of the lab-methods website Protocols.io, wrote a blog post supporting Eisen and countering Wilke’s arguments. But in a later tweet, he pointed out that young scientists might find it hard to avoid naming journals: 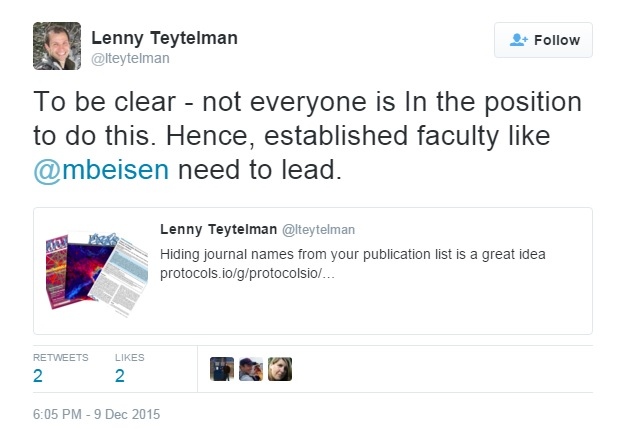 Richard Sever, co-founder of the preprint server bioRxiv and assistant director of Cold Spring Harbor Laboratory Press, jokingly tweeted a reminder that readers also judge papers on the basis of their authors.