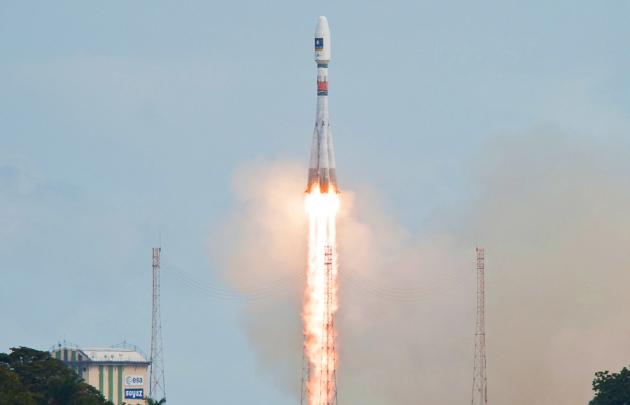 The European Space Agency is still investigating problems with the Galileo satellite launch on 22 August.

On 22 August, the European Space Agency (ESA) launched the first two fully operational satellites of its €6.3 billion (US$8.2 billion) Galileo global navigation system — but something went wrong. After a smooth lift-off from Kourou, French Guiana, tracking data revealed that the Russian Soyuz-Fregat rocket carrying the two craft had put them in the wrong orbit.

Nature explains what might have gone wrong, and what it means for would-be users of Galileo's global navigation data.

Galileo is Europe’s global navigation satellite system, similar to the US Global Positioning System or Russia’s GLONASS. ESA plans to launch a constellation of 30 satellites by 2020 that constantly transmit their locations and times to receivers at the speed of light. Each receiver is able to triangulate its position on Earth by comparing the small delays in the arrival times of signals from multiple satellites.

In addition to the two Galileo satellites launched on 22 August, four test satellites are currently in orbit.

Where are the latest satellites now?

A Soyuz rocket was supposed to launch the two craft into a circular orbit 23,222 kilometres above the Earth, and angled at 56 degrees to the planet’s equator. (All 30 of the Galileo satellites will eventually be arrayed in similar orbits to guarantee global coverage.)

But something went wrong in the rocket’s Fregat upper stage, which boosts the payload to its final orbit. As a result, the satellites were instead placed in an elliptical orbit. The craft now swing from more than 2,000 kilometres too high to nearly 10,000 kilometres too low. The orbits are also tilted by about 5 degrees from the intended plane.

A definitive cause has not yet been announced. The favoured explanation is that the Fregat upper stage of the Soyuz lost control as it was coasting before its final fuel burn to reach the intended orbit. The rocket's engine seems to have fired correctly, but it was pointing the wrong way.

An investigation by an ESA and European Commission committee, appointed by the rocket’s European operator Arianespace, is expected to release initial conclusions as early as 8 September.

Can the satellites be moved to the correct orbit?

There are currently no options to carry out this manoeuvre. The satellites have some hydrazine fuel on board to help them maintain their orbits. But reaching the right orbit would require, by some estimates, two to four times more fuel than the satellites are carrying.

An Israeli start-up, Effective Space Solutions, has said that it could, in theory, build a small satellite that would latch onto the two Galileo satellites and drag them to the intended orbit. The company's robotic design would use an ion thruster — rather than conventional rocket fuel — to slowly but efficiently manoeuvre them.

Jonathan McDowell, an astrophysicist at the Harvard-Smithsonian Center for Astrophysics in Cambridge, Massachusetts, says that back-of-the-envelope calculations suggest that the craft proposed by Effective Space Solutions could carry enough ion fuel to do so. But McDowell cautions that autonomous docking of spacecraft is a complicated engineering challenge for a company with no track record. “I’m very sceptical of this particular company doing it — even though it seems like they might have a good idea,” he says.

Are the wayward Galileo satellites currently of any use?

For most people, the answer is no. The reason is not because the satellites are dysfunctional — in fact, they seem to be working just fine. Rather, their orbit is so misshapen that its mathematical parameters are incompatible with Galileo’s standardized data format.

Information about the satellites' position in orbit is transmitted as a series of digits, and each parameter is assigned a place in the data stream — a certain number of bits, and no more. For example, the value that represents the shape of the satellites' orbit is too big to be expressed within the alloted bit limit for that parameter. This means that would-be commercial users of the Galileo data will not be able to gather useful positioning data from these satellites, and will have to wait for ESA to launch further Galileo craft.

But the situation is more hopeful for many scientists wanting to use Galileo data in their research, says Richard Langley, a GNSS expert at the University of New Brunswick in Fredericton, Canada. Researchers track such navigation probes independently with a global network of dozens of ground stations, and combine that information with the timing data transmitted by the satellites themselves.

ESA continues to review its options and has not made a decision about whether to proceed with transmission of the timing data. But with the satellites appearing to be healthy, Langley is optimistic.

How can scientists use the data?

With Galileo's timing data and the independent ground-tracking information on the satellites' orbits, scientists should be able to measure changes in the position of points on the ground much smaller than the one-metre margin of error for standard navigation-system receivers. This level of precision is good enough to detect millimetres of movement in tectonic plates, for example.

Bringing the satellites online and assessing their health will also provide a useful dry run for the Galileo team, because they are the first of the constellation that are built to fully functional specifications.

How will this failure affect the future status of Galileo?

Not much. ESA is planning to launch more Galileo satellites every few months until the end of 2020, although those plans are on hold while the latest launch is being investigated.

When launches resume, ESA is expected to order two new satellites to replace the off-course craft.

But Langley says that ESA may wish to reconsider which vehicles they use for future Galileo launches. The agency had intended to rely on the Soyuz-Fregat rocket for four more launches before switching to a beefed-up version of the Ariane 5 launcher, which can carry four Galileo satellites at a time. The latest launch trouble could prompt ESA to make the switch earlier, notes Langley.