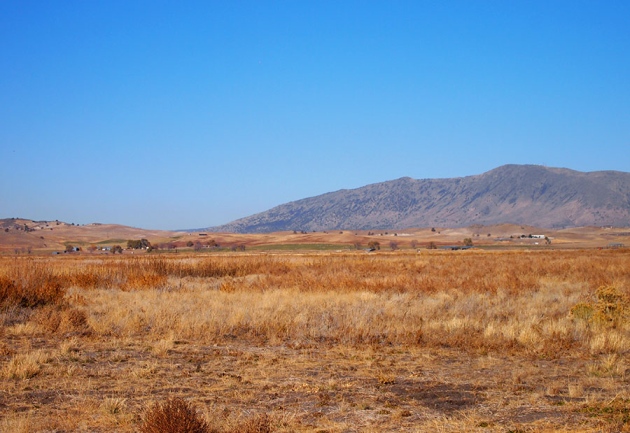 A dried-out part of the Klamath River Basin, which suffers water scarcity in summer.

In the western United States, disputes over the management of the Klamath River, which wends its way from southern Oregon to the Pacific Ocean through northern California, have made blood boil for generations. Cattle ranchers and potato farmers want to take the water out for irrigation; Native American tribes, environmentalists, hunters and anglers want to leave it in to support fish and waterfowl populations. Every summer, tempers flare as the rain dries up and water levels begin to fall.

But until now, most global analyses would not have categorized the basin as experiencing “water scarcity” — a condition defined by the withdrawal of more water than is sustainably available. That’s because the analyses have been done on an annual basis, and it is only for three months of the year, in July, August and September, that water from the Klamath River is in short supply.

Now, two water researchers have created maps that show global water scarcity on a monthly timescale1. They identify areas, including the Klamath Basin, where more water is withdrawn than the region can sustainably support for at least one month per year. More than four billion people, more than half the world’s population, live in such areas, say Mesfin Mekonnen and Arjen Hoekstra at the University of Twente in the Netherlands. And slightly under four billion live in areas of "severe water scarcity", where twice as much water is withdrawn as is sustainably available for at least one month per year. That compares with between 1.7 and 3.1 billion people identified in global assessments that were accounted on annual bases. The analysis is published on 12 February in Science Advances.

For each location, Hoekstra and Mekonnen estimated the monthly withdrawal of water by combining data on crop types, population density and water evaporation, then compared the results to the amount of water available in rivers and lakes. The researchers assumed that 80% of the water would need to stay in the rivers and lakes to support ecosystems; if people dipped into this reserve, then Mekonnen and Hoekstra judged the location as “water scarce” for that month. 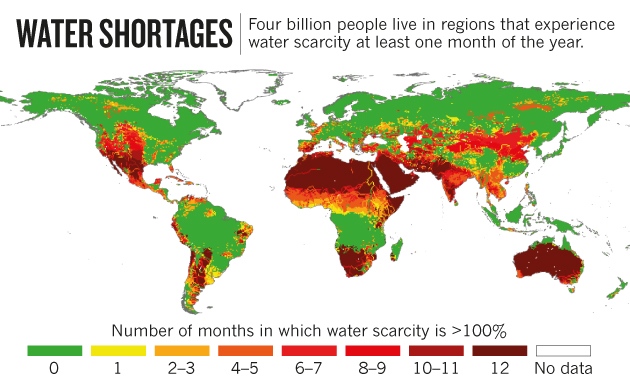 Along with well-known dry places such as Australia and the Middle East, the map identifies parts of Africa and Mexico, southern Europe, Turkey, Central Asia and northern China as places where periods of water scarcity may cause local hardship — but might also trigger problems that extend beyond the places and times where fresh water is in short supply. For example, many of Europe’s imports of food and other goods rely on reliable water in China, Hoekstra notes.

The map can be seen as a guide for international environmental and development institutions that work with water, says Jacob Schewe, a water researcher at Potsdam Institute for Climate Impact Research in Germany. Schewe has devised maps of water scarcity that attempt to predict how climate change will affect the pattern and says that northern China, for example, looks likely to get more arid as the century progresses2. At the local scale, Hoekstra and Mekonnen's analysis begins to define how much water a given place can safely withdraw each month, data that policymakers can use to set limits and prices.

Dipping into water reserves has environmental consequences. “You can still get water from somewhere, but it might mean you get it from a really important ecosystem that dries out and dies while you are swimming in your swimming pool,” explains Schewe. According to Matt Baun, Klamath Basin coordinator for the Fish and Wildlife Service in Yreka, California, overuse of the water from the Klamath River in recent years has led to the deaths of juvenile salmon and has reduced the amount of food and open water that is available for migratory birds at wildlife refuges, resulting in crowding-related outbreaks of avian cholera and botulism.

Those who live in places that show up as water scarce on the map should think about how to adapt and change, Hoekstra says. In the Klamath Basin, this has meant negotiation between former enemies, who are all agreeing to take less water than they want. US film-maker Jason Atkinson has chronicled this process of rancour and compromise in the 2015 documentary A River Between Us. “If you heal people, they would heal the river,” he says.