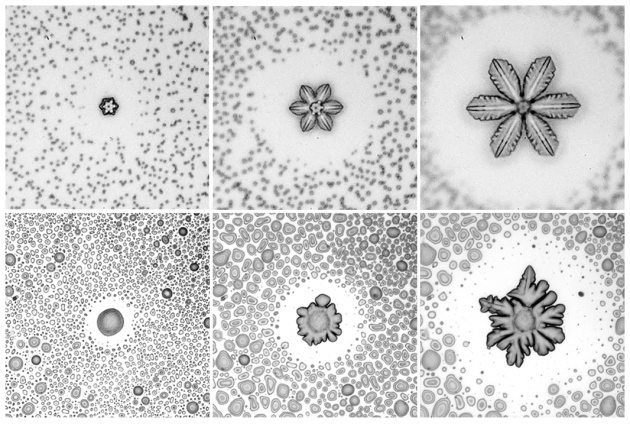 When water droplets suspended in the air freeze, they generate snowflakes — ice crystals with six-fold symmetry. But when ice grows along a solid surface, like frost growing on windows, it can take on an almost infinite range of different shapes.

These crystalline patterns are affected by whether a surface repels or absorbs water, says a team led by materials scientists Jianjun Wang of the Chinese Academy of Sciences Institute of Chemistry in Beijing and Xiao Cheng Xeng of the University of Nebraska–Lincoln. The researchers showed that when a surface tends to repel water, ice crystals can be cultivated to grow away from the surface at an angle, resembling a clover with six leaves.

The work was published on 9 October in the Proceedings of the National Academies of Science1.

Using a high-speed camera attached to a microscope, the team captured imagery of ice forming on aluminium that had been covered with a hydrophobic, or water-repellent, coating. Water drops sprayed on the surface remained taut and spherical instead of spreading out.

The researchers triggered ice formation across the entire surface by spraying it with silver iodide nanoparticles, which acted as seeds for ice growth. As the ice developed, the crystals grew outwards and up from the nanoparticle, forming a symmetrical, six-leafed clover with only a single point of contact with the surface.

On hydrophilic, or absorbant, surfaces, water spread out quickly, and so did ice — forming a sunflower-shaped crystal in full contact with the surface.

The researchers also observed that the clover-like ice crystals growing away from a hydrophobic surface could be removed by wind more easily than crystals on a hydrophilic surface.

They suggest that this could be exploited to make surfaces such as car windscreens more resistant to icing by embedding nanoparticles inside them. “The key is to have these stable ice-nucleation sites,” says Wang.