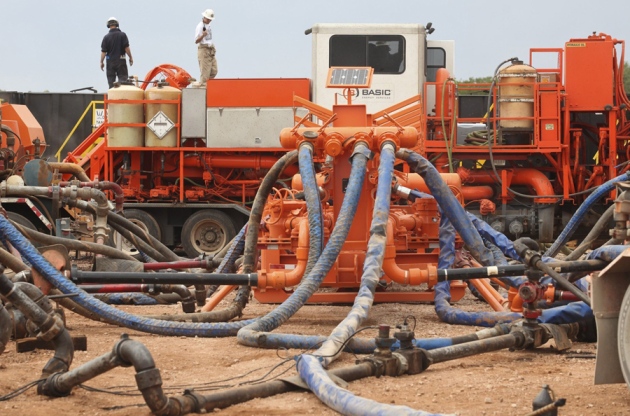 Fracking operations such as this one near Medicine Lodge, Kansas, generate large amounts of wastewater, which is often pumped back underground.

More than 230 earthquakes with a magnitude greater than 3.0 have shaken the state of Oklahoma already this year. Before 2008 the state averaged one such quake a year. The surge in seismic activity has left residents and experts alike wondering about the underlying cause.

Past research has shown that processes such as wastewater injection at oil drilling and fracking sites throughout the state could induce a small number of earthquakes, but scientists have never been able to specifically link some of the more distant or stronger earthquakes with these sometimes faraway wastewater wells. That is, until now.

A study published this week in Science1 explains how wastewater-inection sites — areas where toxic water left over from oil drilling and fracking processes is injected into the ground between impermeable layers of rocks to avoid polluting freshwater — could be driving the sharp increase in the sometimes-disastrous earthquake events. “It really is unprecedented to have this many earthquakes over a broad region like this,” says study co-author Geoffrey Abers of Cornell University. “Most big sequences of earthquakes that we see are either a main shock and a lot of aftershocks or it might be right at the middle of a volcano in a volcanic system or geothermal system. So you might see little swarms but nothing really this distributed and this persistent.”

Abers and his colleagues dug up data on the rates and volumes of liquids associated with the wastewater injection sites. They then modeled the flow of the water and calculated the physical properties of the rocks into which the water was injected. In so doing the team determined that a relatively small number of wastewater injection sites used in oil drilling and fracking in Oklahoma may have the ability after all to induce relatively strong earthquakes a long distance away, throughout the state. “The important thing is that we are seeing earthquakes that are much more widely distributed, much farther from wells and in a lot of different directions,” Abers observes “Some of these earthquakes are as much as 20 miles away from what seems to be the primary wells that are increasing the pressure.”

Scientists have known since the 1960s that wastewater injection, during which millions of barrels of wastewater are forced into a disposal well, can induce earthquakes by increasing the fluid pressures underground. That increasing pressure reduces the frictional strength of faults, Abers explains, allowing them to slip.

Seismologist Austin Holland of the Oklahoma Geological Survey, who was not involved in the study, says there could be a large number of factors playing into the quakes. But like the authors of the new paper, he, too, has found evidence linking the Oklahoma quakes specifically to oil and gas activity. “We certainly do have a contribution from oil and gas, but the question is how much, how extensive is this and how is this occurring,” he says. “This study will certainly help improve our understanding in the scientific discussion of what is occurring in Oklahoma.”

The number of wastewater injection sites also seems to keep increasing, according to Abers, who notes that the permitted rate of wastewater doubled between 2004 and 2008, and has most likely increased since then. He says several earthquakes in Texas over the past few years have been linked to wastewater injection but the scale of these events pales in comparison with what is happening in Oklahoma. There have also been well-documented cases of wastewater injection-driven quakes in Ohio, Utah, Colorado and British Columbia, all within the last year or so.

Holland added that these events demand political and social discussion. “Just how important is it to produce oil and gas in Oklahoma, and are we willing to deal with the issues of these disposal wells in order to produce the oil and gas that we are accustomed to producing?” he asks.

Abers notes that ongoing research on this topic will be needed to better understand the complexity of these processes as they continue into the future. “I think this rate of earthquake increase in the midcontinent is really extraordinary and is continuing, but this isn’t the last word on this in any means,” Abers remarks. “There is clearly something important going on there that we need to keep an eye on and that we need to be trying to understand.”