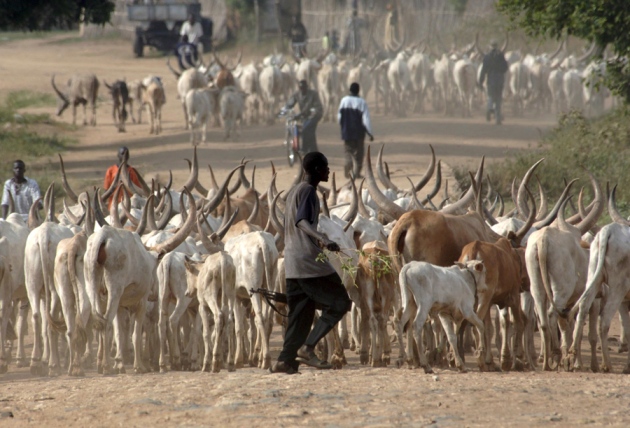 Conflicts among cattle-herding ethnic groups in east Africa can be linked to climate change.

Tempers flare as temperatures rise — across the globe and throughout human history, researchers have found. The result is consistent with a growing body of research suggesting that climate change somehow incites human conflict.

Small changes in temperature and rainfall substantially raise the risk of conflict of many types, from interpersonal spats — such as aggressive horn-honking by automobile drivers — to full-blown civil war and societal collapse, researchers report today in Science1. They reviewed data from 60 studies on environmental change and human aggression that spanned six continents and more than 12,000 years.

The researchers found that a temperature rise of one standard deviation — which, in the United States today, occurs when the average temperature for a given month is about 3° Celsius higher than usual — increases the frequency of interpersonal violence by 4%, and the risk of intergroup conflict, such as civil war or rioting, by 14%.

Floods and drought also have an effect, although it is smaller than that of temperature, the researchers report. And the effects are apparent worldwide, in developed and developing countries.

“The level of consistency in how people are responding was surprising to us,” says Solomon Hsiang, an econometrician at the University of California Berkeley, who led the study. He and his team warn that climate’s influence on behaviour is likely to become more apparent as the planet warms and precipitation patterns change.

The researchers did not attempt to explain how climate exerts its apparent influence on human behaviour. They linked climate extremes to many types of conflict, from the fall of the fractious Classic Maya empire in the ninth century, to professional baseball pitchers purposely hitting opposing batters with balls. But the lack of causal mechanisms leaves many political scientists sceptical about the environment’s role in conflicts, which they say are driven by a complex array of social factors.

“It’s hard to see how the same causal mechanism that would lead to wild pitches would be linked to war and state collapse,” says Idean Salehyan, who studies political violence at the University of North Texas in Denton.

Similarly, Halvard Buhaug, a political scientist at the Peace Research Institute Oslo in Norway, says that the latest study does little to sway his belief that the climate–conflict link is weak and inconsistent. He has found that major conflicts in Africa have declined over the past few decades, despite noticeable warming there2, 3 — bucking the trend sketched in the latest study and in earlier, similar studies4, 5.

The contradictory results point to the need for researchers to test the links between climate and conflict in case studies where more variables can be tracked, says Andrew Solow, an environmental statistician at the Woods Hole Oceanographic Institution in Massachusetts.

Without that focus, he warns, researchers may unintentionally exaggerate the climate–conflict relationship by tweaking the definition or historical bounds of a conflict. “In the aggregate, if you work the data very hard, you do find relationships like this,” he says. “But when you take a closer look, things tend to be more complicated.”