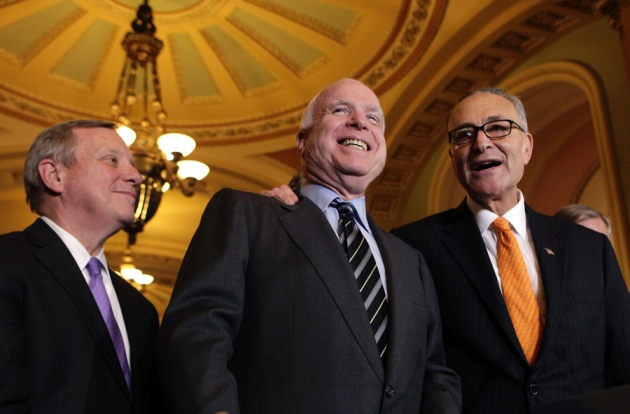 Senators (from left) Richard Durbin, John McCain and Chuck Schumer celebrate on 27 June after the passage of the immigration bill they helped orchestrate.

For Gaurav Basu, a graduate scholarship in 2003 helped to fulfil a long-held ambition of pursuing scientific research in the United States. In 2009, Basu, a native of India, earned his PhD in biomedical sciences from Eastern Virginia Medical School in Norfolk.

But Basu is struggling to keep his American dream alive after finishing a postdoctoral fellowship at Old Dominion University in Norfolk in 2011. With his temporary work visa set to expire in 2015, he is now working as a consultant in northern Virginia — and fighting tough odds to stay in the United States permanently by applying for a coveted but scarce ‘green card’.

Those green cards could soon flow more freely to scientists such as Basu. After years of debate and many failed attempts, on 27 June the US Senate approved a comprehensive immigration plan that would allow thousands more foreign scientists and engineers to remain in the United States permanently.“It’s a phenomenal improvement over the current situation,” says Russell Harrison, a senior legislative representative for IEEE-USA in Washington DC, which advocates for US members of the Institute of Electrical and Electronics Engineers.

Under current policy, the number of green cards that can be issued each year is limited to 140,000, a figure that is further reduced by per-country caps. Applicants from countries that send large numbers of immigrants — such as China, India, Mexico and the Philippines — must often wait for years, subsisting on a string of temporary work visas that can be revoked at an employer’s discretion.

“Our system is absolutely, utterly broken,” says Amy Scott, associate vice-president for federal relations at the Association of American Universities in Washington DC. 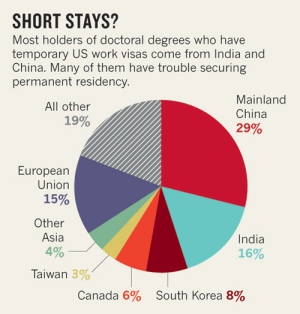 The Senate bill would end country-based caps and exempt researchers in some disciplines from limits altogether. Applicants with master’s or doctoral degrees in science, technology, engineering or mathematics (STEM) obtained from US universities would be eligible to tap an unlimited pool of green cards. And, unlike previous proposals, the bill brings biological and biomedical sciences under the STEM umbrella.

According to the most recent statistics from the National Science Foundation, about 25% of the US science and engineering workforce comes from other countries. People from China and India made up nearly half of PhD holders who received temporary work visas in 2009 (see ‘Short stays?’). And many of them lead tenuous lives in their adopted country.

Among them is Somiranjan Ghosh, a senior research associate in molecular genetics at Howard University in Washington DC. Ghosh came to the United States from India in 2003 for a postdoctoral fellowship at the National Cancer Institute in Bethesda, Maryland, and finished a second fellowship at Howard University in 2007. He applied for permanent residency in December 2010 and was approved in 2011, but he has yet to receive his green card.

Ghosh also wants to travel abroad, but, without a green card, he could encounter admini­strative delays when he tries to re-enter the United States. Last year, he turned down an invitation to speak at a conference in France.

“Our system is absolutely, utterly broken.”

Worries about conference travel are a big problem for many postdoctoral fellows on temporary visas, says Benjamin Corb, director of public affairs at the American Society for Biochemistry and Molecular Biology in Rockville, Maryland. “They just don’t go, so they lose out on that opportunity in their professional career,” he says. That understandable caution can also exact heavy personal costs. Ghosh was too afraid to return to India to see his sister before she died of cancer in January.

Ghosh’s visa, unlike a green card, does not allow him to change jobs easily. He would like to move into the field of medical diagnostics and eventually start his own company. “I’m 45 now,” he says. “I want to start my own career.”

Hopes of clearing the green card logjam now rest with the Republican-controlled House of Representatives, and its leaders are preparing separate proposals to address immigration. Although increased immigration for scientists and engineers enjoys broad bi­partisan support, Republicans argue that STEM green cards should be created only at the expense of other categories, such as the annual green card lottery for natives of countries that send few immigrants to the United States. But Democrats, who control the Senate, reject that notion. Any changes to the visa system will require agreement by both sides on a broader suite of hotly contested immigration issues.

For Basu, the stakes may be higher than for most. He and his wife are expecting their first child in three weeks, and he worries that the family may ultimately have to move back to India — away from the life they have created in Virginia. “Our kid will be an American citizen,” says Basu. “We have roots here.”