The climate summary findings of the Intergovernmental Panel on Climate Change (IPCC) are becoming increasingly unreadable, a linguistics analysis suggests.

IPCC summaries are intended for non-scientific audiences. Yet their readability has dropped over the past two decades, and reached a low point with the fifth and latest summary published in 2014, according to a study published in Nature Climate Change1. 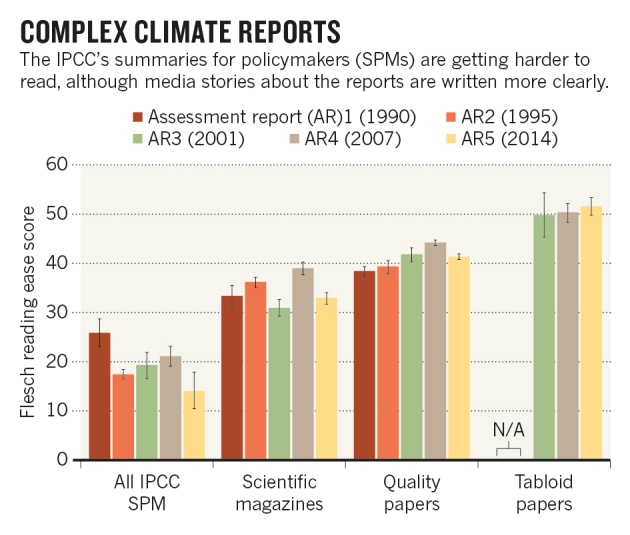 The study used the Flesch Reading Ease test, which assumes that texts with longer sentences and more complex words are harder to read. Reports from the IPCC’s Working Group III, which focuses on what can be done to mitigate climate change by cutting carbon dioxide emissions, received the lowest marks for readability.

Confusion created by the writing style of the summaries could hamper political progress on tackling greenhouse-gas emissions, thinks Ralf Barkemeyer, who led the analysis and works on sustainable business management at the KEDGE Business School in Bordeaux, France. The readability scores “are not just low but exceptionally low”, he says. (For comparison, Barkemeyer says that the team analysed a few seminal physics papers by Albert Einstein and Stephen Hawking, all of which ranked significantly higher than the IPCC documents on readability.)

“This illustrates that there should be quite a bit of room for improvement in the summary documents,” he says, “without the need to simplify or even change the messages that are communicated.”

By contrast, Barkemeyer’s team found that news stories about climate science are easier to read and have not changed their standards over time: tabloid versions are the simplest to comprehend, followed by what the analysis calls 'quality' newspapers and then science publications (represented by news and editorial articles from Nature and Science). The researchers also say that the tone of media coverage is more emotive than the IPCC reports, and is becoming increasingly pessimistic.

But Michael Oppenheimer, a climate scientist at Princeton University in New Jersey, is not sure that the readability of the IPCC reports is an issue. The government officials who need to understand the summary reports are themselves involved in the drafting of the documents, he says — whereas the general public reads news media stories, not the summary reports.

“If newspapers and other intermediaries are doing a progressively better job of communicating IPCC findings to the larger public, and if governments are happy, is there really a problem?” he asks.

But Barkemeyer notes that not all government officials are experts at the level of those who are in the room when the summary documents are negotiated. And, he points out, the readability test does not assess for accuracy. Given that IPCC assessments generate widespread news coverage, the panel has all the more incentive to make sure that its reports are clear and comprehensible, he says.

The IPCC is currently considering a proposal to enlist science writers and graphics experts to improve the reports. Both Oppenheimer and Barkemeyer support the idea, although Barkemeyer says that adding more people to the mix runs the risk of creating additional confusion when scientists and government officials are negotiating the actual text. “Science communication training for lead authors could be more promising and less controversial,” he says.