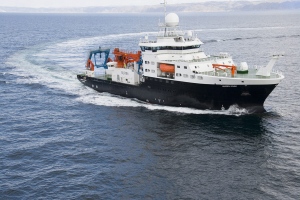 Many British oceanographers have been cut adrift by their research council.

Oceanographers around the world are warning that cuts to the United Kingdom's National Oceanography Centre (NOC) could damage international projects in their field — and cuts at more UK environmental-research centres could soon follow.

Nature reported yesterday that 35 posts are to be lost in the science section at the NOC’s sites in Southampton and Liverpool. The cuts stem from financial strictures imposed by the centre's main funder, the UK Natural Environment Research Council (NERC), which have necessitated savings of £3.5 million (US$5.6 million) a year on the centre's £45-million annual budget. The job losses amount to nearly one-quarter of the science staff at the NOC.

In a statement, the NOC confirmed that the cuts were driven by “an overall squeeze on the Natural Environment Research Council’s budget and the rebalancing of NERC’s spend from core national capability funding towards more competitive research programme funding”.

The centre has played a pivotal part in a number of major international projects, including the European Space Agency's Soil Moisture and Ocean Salinity satellite and the Census of Marine Life. Peter Challenor, an ocean scientist at the NOC in Southampton, says that the cuts have hit the physics and climate groups particularly hard. “It’s going to severely damage the United Kingdom’s ability to do ocean modelling and the ocean component of climate modelling,” he warns.

Helen Snaith, a researcher at the same site and the centre's representative for the Prospect trade union, says that expertise in vital areas will be lost, and there will be “potentially dire consequences” for the NOC’s ability to work collaboratively and internationally.

“The pressure on staff is to focus on research topics that can be addressed with a series of short-term, limited-scope projects — a process that does not fit well with the requirements to carry out the internationally coordinated, long-term research programmes necessary to address increasingly complex climate-related issues,” she says.

One such international programme is the Nucleus for European Modelling of the Ocean (NEMO), a comprehensive computer model used to study everything from sea ice to jellyfish populations in hundreds of projects across 27 countries. Gurvan Madec, who works with NEMO at the Pierre Simon Laplace Institute in Paris, says that the NOC made a major contribution to the project’s maintenance and evolution.

“The team in Southampton is formed of highly skilled engineers and researchers in ocean modelling, having years of experience in the field,” says Madec. “Cutbacks in this team will not kill NEMO, but slow down its evolution, in particular for global ocean modelling.”

In a statement, NERC insisted that the NOC would remain one of the world’s largest oceanographic centres after the current restructuring, “with a somewhat leaner, but even more highly competitive scientific team”.

But Ken Caldeira, an environmental scientist at the Carnegie Institution in Stanford, California, foresees a wider problem. The NOC cutbacks "send a signal throughout the world that the United Kingdom does not value oceanographic science highly," he says. "This signal could be received in other countries as indicating that oceanography might be an easy target for budget cutting.”

The geological survey said in a statement that “in common with many other research organisations” it was currently “reshaping its workforce needs to meet its strategic scientific objectives”. Any job losses will initially be through retirements, contracts ending and voluntary exits, it said.

Ian Dunn, head of corporate services at the British Antarctic Survey, said that his centre had made voluntary job reductions last year as it sought to “manage activity within the available budget”, but he added that there remains the possibility of further job cuts.

NERC says that it continues to work with all its centres as part of its financial and business planning and is “unable to rule out changes in the future”.