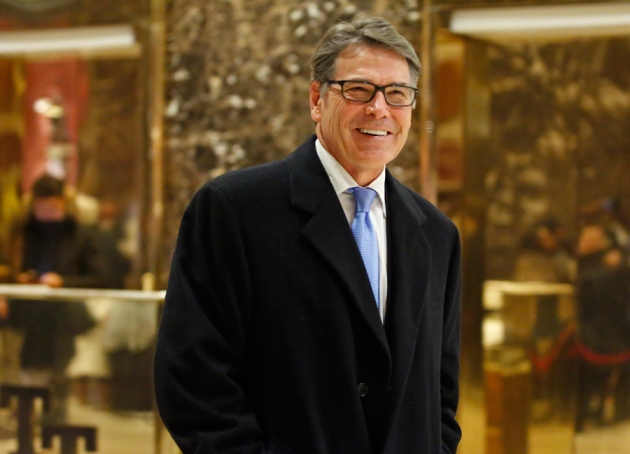 Rick Perry embraced an “all of the above” energy policy as governor of Texas.

Perry, a former farmer and US Air Force pilot, led Texas from 2000 to 2015. Unlike the last three energy secretaries, he has no technical background in the physical sciences, technology or nuclear weapons — subjects at the core of the department's mission. And when he sought the Republican presidential nomination in 2012, Perry proposed abolishing the energy department (and famously forgot its name during a primary debate).

“If you don’t have the technical background and you don’t have the exposure to the weapons labs, you have to be on a really fast learning curve,” says Michael Lubell, a physicist at the City College of New York. “Time will tell what happens with Perry, but he starts with a great disadvantage.”

Perry does have experience in dealing with Texas' powerful oil and gas industry. As governor, he supported fossil-fuel production — and questioned the science underlying climate change. But the state also significantly boosted its share of renewable energies such as wind and solar during Perry's tenure.

Salo Zelermyer, a lawyer at the firm Bracewell in Washington, DC and former DOE counsel under President George W. Bush, says Perry embraced an “all-of-the-above” approach to energy policy in Texas. “This track record will serve Perry well not only in leading DOE but also in becoming a significant part of the new Administration’s approach to issues like regulatory reform and infrastructure investment,” Zelermyer said in a statement.

Lubell notes that Perry would not be the first energy secretary without a technical background, nor even the first who has proposed eliminating the DOE. Spencer Abraham, who served under President Bush, once did the same. Having a technical background does not guarantee success in leading the department, Lubell adds, but it does make it easier to manage the agency's science portfolio and its sprawling complex of nuclear weapons laboratories.

John Deutch, a chemist at the Massachusetts Institute of Technology in Cambridge and former director of the Central Intelligence Agency under President Clinton, says his biggest concern is Perry’s lack of experience with the energy department's broader portfolio. He says that Trump should identify a deputy energy secretary who understands national defense and the weapons programme, as well as experienced experts to lead the energy and basic science programmes.

Deutch, who leads the energy department's advisory board, says there is reason to hope for a smooth transition. He had a leadership post at the department under President Jimmy Carter and witnessed the changeover when Ronald Reagan entered the White House. The switch was not as disruptive as many feared it would be, he says. “Perhaps with the dimming memories of an old man, I have hope that this transition will be positive,” Deutch adds. “Not better, but positive.”

Perry’s nomination comes at a tense moment within the DOE. Trump’s transition team has riled staff by circulating a memorandum calling for the names of department officials who have been involved in climate policy — raising fears of blacklisting or retaliation. The department has refused to comply with the request, and says that it will only provide the transition team with publicly available information.

Updated with comments from John Deutch.