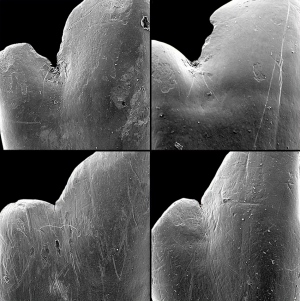 By analysing the roughness of a single tooth using three-dimensional (3D) imaging, scientists can now identify what a fish has eaten. They can use this information to classify species more quickly and easily than with standard methods.

Mark Purnell, a palaeobiologist at the University of Leicester, UK, and his colleagues took advantage of advances in a technique called microtextural analysis. “Until recently, quantification of surface roughness used a two-dimensional approach comparable to a gramophone, recording up and down profiles by dragging a stylus across the surface,” he says.

But now, researchers can use a focus-variation microscope to build up a 3D picture. The technique was designed for industry, and has been used to analyse the surfaces of products ranging from hip replacements to chocolate.

The microscope maps the peaks and troughs of a surface, revealing patterns of wear. “Studying the roughness of teeth is like studying a landscape,” says Purnell.

His team looked at the teeth of cichlid fish collected from Lake Victoria in East Africa. The results are published today in the Journal of the Royal Society Interface1.

Cichlids are known to have evolved rapidly into many different species adapted to a wide range of diets. Three of the species examined in the study eat algae using 'oral teeth' in the mouth: two, Neochromis gigas and an unnamed species from the genus Haplochromis, graze off rocks. The third, another species of Haplochromis, scrapes algae off plants.

The researchers also studied Astatoreochromis alluaudi, which crunches molluscs using pharyngeal jaws further down the throat. They compared the teeth of wild fish with those of animals fed a softer diet in the laboratory.

The team could identify the fish species from their teeth more accurately using 3D microtextural analysis than they could using two-dimensional techniques. But Purnell thinks that until the 3D method has been verified with larger sample sizes, the approach will remain complementary to existing methods.

One existing method is time-consuming and unpleasant: sifting through stomach contents to determine what an animal has eaten. Microtextural analysis is much more convenient, and also offers another advantage — stomach contents vary from day to day, whereas tooth wear reveals long-term patterns of diet.

“Our ancestors were fish and ‘non-chewers’ for about as long as they were mammals," says Peter Ungar, a palaeoecologist at the University of Arkansas in Fayetteville. Microtextural analysis "can teach us about our very distant pre-mammalian ancestors and others that lived during the first half of vertebrate evolution”, he says.

Gildas Merceron, a palaeobiologist at the Claude Bernard University of Lyons 1 in France, has conducted similar work on antelopesand apes2, 3. He notes that teeth could also record seasonal and gender variation in diet.