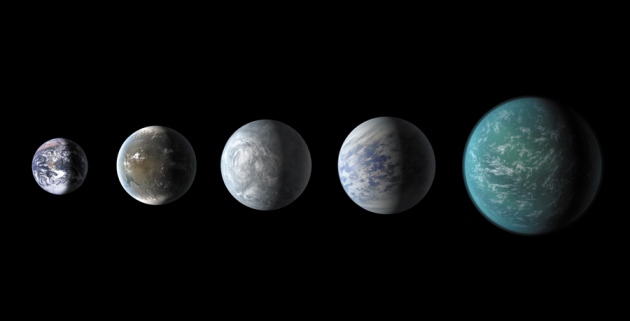 Four potentially habitable planets (artist’s impression) have turned up in Kepler’s data so far, but the crippled spacecraft may not find a true twin for Earth (far left).

NASA’s Kepler spacecraft is not only the most prolific exoplanet detector ever; it is — or was — a marvel of engineering. Its 1.4-metre mirror funnels starlight to a 95-megapixel camera, capable of discerning dips in brightness as small as 10 parts per million — clues to the mini-eclipses caused by an exoplanet crossing the star’s face. Yet on 14 May, the US$600-million craft was derailed by the failure of one of its only moving parts — a roughly $200,000 device akin to a child’s gyroscope.

Mission scientists knew that the craft was vulnerable. Kepler is equipped with four metal reaction wheels — motors that, when spun up in one direction, cause the spacecraft to turn in the other. At least three are needed for the craft to remain stable, and one had failed last July. “We recognized that the wheels had a rather chequered history,” says William Borucki, a space scientist at NASA’s Ames Research Center in Moffett Field, California, and principal investigator of the Kepler mission. When the second wheel stopped turning — probably because of a problem with its ball bearings or housing, say NASA scientists — Kepler put itself into safe mode, pending a repair that many say is unlikely to happen. 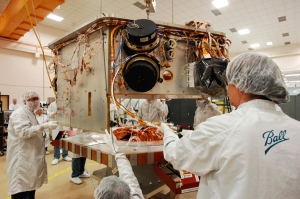 Two of four reaction wheels (in black) on the Kepler spacecraft have failed, effectively ending the mission.

Spinning at 1,000–4,000 revolutions per minute, reaction wheels fine-tune a spacecraft’s orientation, exerting precise torques through careful control of their speed. Even before Kepler launched in 2009, the mission team was painfully aware of problems from a host of virtually identical reaction wheels made by the same manufacturer and installed on several other spacecraft.

Reactions wheels of this type failed, or were deemed too unreliable to be used, on NASA’s Far Ultraviolet Spectroscopic Explorer in 2001 and Japan’s Hayabusa mission in 2004 and 2005. NASA’s Thermosphere, Ionosphere, Mesosphere Energetics and Dynamics (TIMED) satellite experienced a single reaction wheel failure in 2007, and the agency’s Dawn mission suffered two failures, in 2010 and 2012.

Most of these malfunctions occurred well before Kepler’s launch, but the failure on TIMED created a critical mass of concern, recalls John Troeltzsch, Kepler programme manager for Ball Aerospace in Boulder, Colorado, which built the craft for NASA. “We first really realized how serious it was at the end of 2007,” he says.

By then, Kepler was ready for launch. Options such as overhauling the entire reaction-wheel system or adding another set of back-ups were deemed too costly and would have meant years of further delays for a mission that had already been postponed twice.

But the team wanted to take one last look. In early 2008, Troeltzsch and his colleagues took all four wheels out of the spacecraft and sent them back to the manufacturer, Ithaco Space Systems in Ithaca, New York, for re-inspection. Changes were made, including replacing the ball bearings, which had already shown signs of pitting, says Charles Sobeck, Kepler’s deputy project manager at Ames. Troeltzsch says, “The assessment was that the changes would prevent the recurrence of the types of problems that had happened before.” Through a spokesman, Ithaco owner UTC Aerospace Systems declined to respond to questions about how the company had tried to fix the wheels, referring the questions back to NASA.

Borucki notes that, at the time, potential problems with the reaction wheels seemed less of an issue because the mission was supposed to last for only 3.5 years. That was how long it was expected to take for Kepler to achieve its main goal: surveying a group of about 150,000 Sun-like stars up to 920 parsecs (3,000 light years) away to determine how common Earth-sized planets in Earth-like orbits are in the Galaxy. 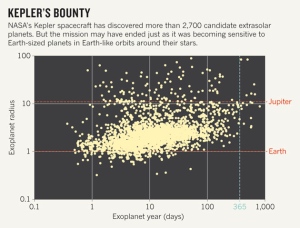 After launch, however, scientists discovered that most stars are more variable than the Sun (see Nature 477, 142–143; 2011). The mission would need more time to distinguish a random fluctuation in a star’s brightness from a dip in starlight due to a passing planet, so last year, NASA extended the mission until 2016. But around the time of that decision, the first reaction wheel went bad. With the loss of the second wheel, says Troeltzsch, “the science we were doing with Kepler, as we were doing it, is over”.

Although engineers will try to reactivate the failed wheels in the next couple months, Troeltzsch is not hopeful. “It’s very unlikely that it can be restored to any kind of usefulness,” he says. Thrusters on board the craft may be able to serve as a crude stand-in, but they were not designed to provide the precision orientation needed. Efforts to bring the mission back to life will probably continue until the end of autumn, says Sobeck.

In the meantime, Borucki’s team is analysing the two most recent years of Kepler data, which seem likely to add hundreds of candidate planets to the mission’s current tally of more than 2,700 (see ‘Kepler’s bounty’). Because the most recent data contain information on planets with orbits of similar length to Earth’s, Borucki is optimistic that they will reveal a reasonable estimate of the frequency of Earth analogues in the Galaxy.

Sara Seager, an exoplanet theorist at the Massachusetts Institute of Technology in Cambridge, is not so sanguine. She says that the data may yield decent statistics about Earth-sized planets in orbits up to about 200 days, but not all the way up to orbits in the ‘habitable zone’ of a Sun-like star, which are around 365 days. She is hopeful, however, that a few such planets are buried in the remaining data. “It’s possible, and even likely.”