Data-sharing rule The International Committee of Medical Journal Editors has proposed that it should be mandatory for research-paper authors to share the data underlying their findings. In an editorial published in several prestigious medical journals on 20 January, the group said that authors should share anonymized patient data with other researchers no later than six months after publication (see, for example, D. B. Taichman Ann. Intern. Med. http://doi.org/bb4h; 2016). The committee also said that a plan for how data will be shared should be part of the clinical-trial registration process. Signatories to the editorial include the editors-in-chief of The New England Journal of Medicine and The Journal of the American Medical Association. 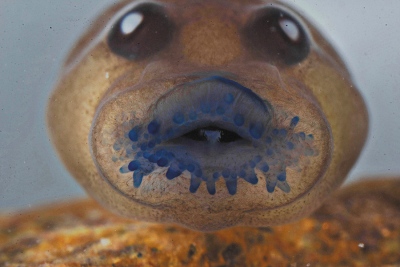 DNA search reveals new frog genus DNA analyses have unveiled a new genus of frogs. The group, Frankixalus, hails from northeastern India and includes a taxonomically challenging amphibian, first described in 1876 and named Polypedates jerdonii. The species, now renamed Frankixalus jerdonii (pictured),is joined in the new genus by one other — currently unnamed — species. Classification of these tree-hole dwelling frogs had been confounded by their large snout vents and the high degree of webbing between their toes. But a genetic analysis led by S. D. Biju at the University of Delhi places the frogs in a distinct group (S. D. Biju et al. PLoS ONE 11, e0145727; 2016).

Hottest year Last year was the hottest on record, according to data released on 20 January by NASA, the US National Oceanic and Atmospheric Administration (NOAA) and the UK Met Office. All three organizations document unprecedented high temperatures in 2015, pushing the global average to more than 1 °C above pre-industrial levels. A powerful El Niño weather system, marked by warmed waters in the tropical Pacific Ocean, helped to drive atmospheric temperatures well above those for 2014, the previous record high. Some researchers suggest that broader trends in the Pacific could spell even more dramatic temperature increases in years to come. See page 450 for more.

Davos debates Health, science and environmental issues were high on the agenda at the World Economic Forum (WEF) meeting in Davos, Switzerland, where international leaders met on 20–23 January. The 2016 meeting — which had as its theme ‘the fourth industrial revolution’ — saw 85 pharmaceutical companies demand new business models to incentivize the development of antibiotics to combat drug-resistant infections. Environmental discussions included a WEF report predicting that the oceans would contain more plastic than fish by weight by 2050, and an updated Environmental Protection Index report from Yale University in New Haven, Connecticut, which shows an increased degradation of air quality around the world.

Turkish protest An international coalition of 20 higher-education organizations has written to the Turkish president, Recep Tayyip Erdoğan, urging him to reaffirm Turkey’s commitment to academic freedom and freedom of expression. The 21 January letter, from organizations including the European University Association and the Scholars at Risk Network, voices concern about academics who signed a petition calling on the government to end violent conflict in the country’s predominantly Kurdish southeast. Erdoğan had accused the petition’s signatories of spreading terrorist propaganda, and the letter says that 1,128 academics have since been placed under investigation.

Zika virus fears Concern over the mosquito-borne Zika virus outbreak in the Americas is growing. In a statement on 24 January, the Pan American Health Organization warned that Zika is likely to reach all countries in the region where the Aedes mosquitoes that transmit the virus live. The organization, a regional office of the World Health Organization, called for improved mosquito control, and advised people, especially pregnant women, to protect themselves from bites. In a risk assessment on 21 January, the European Centre for Disease Prevention and Control called for more surveillance of travellers returning from affected countries, so as to rapidly identify potential cases. This followed a 15 January travel warning from the US Centers for Disease Control and Prevention about Zika, which some evidence has linked to babies born in Brazil with unusually small heads and brains. 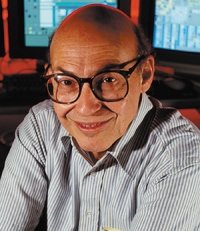 AI pioneer dies Artificial intelligence (AI) expert Marvin Minsky (pictured) died, aged 88, on 24 January. After gaining his PhD at Princeton University in New Jersey, Minsky joined the Massachusetts Institute of Technology (MIT) in Cambridge, where he co-founded the AI Laboratory and the MIT Media Lab. He built the world’s first neural-network simulator, invented the confocal microscope and received almost all of the major awards in his field.

Berkeley lab head Particle physicist Michael Witherell will become director of the Lawrence Berkeley National Laboratory on 1 March. The University of California, which manages the lab on behalf of the US Department of Energy, announced the move on 21 January. Located in Berkeley, California, the lab has an annual budget of nearly US$800 million and is home to research in fields ranging from materials science to genomics. Witherell is currently vice chancellor for research at the University of California, Santa Barbara, and led the Fermi National Accelerator Laboratory in Batavia, Illinois, from 1999 to 2005.

Koch quits Billionaire David Koch has left his long-standing position on the board of trustees of the American Museum of Natural History in New York City, The New York Times reported on 20 January. Koch has given millions of dollars to the museum, which named its dinosaur wing after him. But his presence on the board has been criticized by scientists and activists because the Koch family has also funded climate-change deniers. Koch’s last day on the board was 9 December. Koch remains on the advisory board of the Smithsonian National Museum of Natural History in Washington DC.

Freedom plea More than 360 researchers from around the world have asked Iran to free retired polymer scientist Mohammad Hossein Rafiee-Fanood, in a letter to the country’s president, Hassan Rouhani. Rafiee, who is 71 years old, was imprisoned for “peaceful political activism”, according to Amnesty International, which regards him as a prisoner of conscience. The letter, published on 26 January (see go.nature.com/7wflr7), says that he is kept in inhumane conditions and that the scientist’s imprisonment breaches both the Constitution of the Islamic Republic of Iran and the International Covenant on Civil and Political Rights.

Trade theft Federal prosecutors in Pennsylvania have charged five people, including two researchers, with the theft of trade secrets from pharmaceutical giant GlaxoSmithKline (GSK). The researchers were employed at the company’s facility in Upper Merion, Pennsylvania, and allegedly supplied confidential information about GSK’s experimental therapies to a biotechnology company headquartered in China. The trade secrets in question include information about the production of therapeutic antibodies, including one in development to treat cancer. 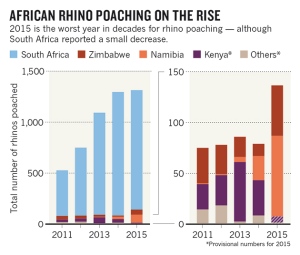 At least 1,312 rhinoceros were illegally killed in Africa in 2015 — a record high for the continent, according to figures released on 21 January by TRAFFIC, a wildlife-trade monitoring network based in Cambridge, UK. South Africa, which has the largest share of this poaching, reported a small decrease — from 1,215 rhinos in 2014 to 1,175 in 2015. But that was more than offset by rises in illegal killing in neighbouring countries, according to TRAFFIC.

274,207,281 − 1
The largest known prime number, at more than 22 million digits. The find was announced this month by the Great Internet Mersenne Prime Search.

1–4 February
The Delhi Sustainable Development Summit is hosted by TERI, the energy and resources institute.
go.nature.com/ndvmaj