Access complaint US federal agencies, including the Food and Drug Administration and the Centers for Disease Control and Prevention, are continuing to restrict journalists’ access to information, according to the Society of Professional Journalists in Indianapolis, Indiana. In July 2014, the society complained that staff at the agencies were being prohibited from communicating with journalists and that interviews with federal employees were being monitored. A survey by the society in April this year found that science journalists are also affected by these practices. In a letter sent to US President Barack Obama on 10 August, 53 journalism and open-government groups say that restrictions on access to federal information are dangerous and should be lifted.

Greek bailout boost The Greek government will soon allow researchers to apply for research grants for the first time in several years, after the country’s third bailout in five years was approved on 14 August. The bailout — which must still be ratified by eurozone parliaments — contains two portions of money earmarked for research. These include €59 million (US$66 million) for proposals previously frozen in the crisis and €53 million for new calls and international projects. The debt crisis has left researchers reliant on international grants — some have had to ask collaborators abroad for basic supplies. It is hoped that the funding will help to address Greece’s brain drain. See page 273 for more. 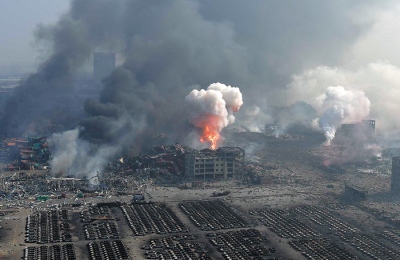 Chinese chemicals blast hits port city China’s prime minister, Li Keqiang, has promised a thorough investigation into explosions that occurred on 12 August at a chemicals warehouse in the port city of Tianjin. The blasts killed more than 100 people, with dozens still missing; most of the dead and missing are firefighters. Local officials confirmed that highly toxic sodium cyanide was present at the site, although they said that it would be neutralized. The blasts also damaged the building that houses China’s supercomputer, Tianhe-1, which has been used extensively in the country’s space programme. The computer was running smoothly after the explosions, but was shut down for security reasons. Local media aired allegations that regulatory impropriety allowed the warehouse to be sited too close to residential and business areas.

Muslim climate call Islamic leaders have told the world’s 1.6 billion Muslims that it is their religious duty to meet the challenge of climate change. The declaration, made on 18 August at the International Islamic Climate Change Conference in Istanbul, Turkey, called for climate education in mosques and Islamic schools, and appealed to rich, oil-producing nations to lead emissions cuts. The announcement was accompanied by messages of solidarity from other faiths. Some observers are cautiously optimistic about its impact on the behaviour of individuals, but more sceptical about its ability to influence government policy.

Record El Niño An El Niño event developing in the eastern Pacific Ocean could be one of the strongest on record, forecasters with the US National Oceanographic and Atmospheric Administration announced on 13 August. The periodic weather pattern — signalled by warming waters and weakening trade winds — often leads to wetter winters in the southern United States and dry conditions in Australia, Indonesia and India. In California, where drought has decimated state water supplies, the rains would be welcome, but forecasters say that one strong El Niño will probably not slake the state’s thirst. See go.nature.com/tjgdhz for more.

Fossil-fuel plea Almost 1,000 health professionals and academics have signed a letter asking two of the world’s biggest medical charities to sell off investments in fossil-fuel companies. The letter, released on 14 August, calls on the Bill & Melinda Gates Foundation in Seattle, Washington, and the London-based Wellcome Trust to divest their shares in the world’s 200 largest fossil-fuel companies within 5 years. According to 2014 financial documents, the Wellcome’s £18-billion (US$28-billion) endowment included investments totalling more than £500 million in several such companies. Its director, Jeremy Farrar, has previously defended these investments, arguing that they give the charity leverage to influence the companies’ practices. 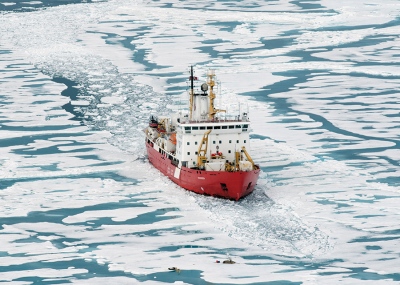 Ice delays science The Canadian Coast Guard’s Amundsen icebreaker (pictured), which is being used for the Canadian part of an Arctic oceanographic programme, is due to end the first leg of a disrupted cruise this week. The research trip is part of the international GEOTRACES programme studying pan-Arctic Ocean geochemistry. Soon after the Amundsen left Quebec City on 10 July, the Coast Guard diverted it to break ice for commercial vessels in Hudson Bay, despite objections from the cruise’s chief scientist, Roger François of the University of British Columbia in Vancouver. Although it lost two weeks, the cruise was able to salvage nearly all of its science, but François says that the decision underscores “systemic inadequacies” in Canadian oceanographic research.

Gamer danger Exposure to violent video games is linked to aggressive behaviour in older children, adolescents and young adults, according to a report issued by the American Psychological Association (APA) on 13 August. The organization reached its conclusion on the basis of 31 studies published in 2009–13. It could not, however, determine the relationship between video games and criminal behaviour or delinquency. In response to the findings, the APA has adopted a resolution that calls for a refined rating system for video games to better reflect violent content.

Pollution deaths Air pollution in China is responsible for nearly 17% of the country’s deaths each year, according to a study by Berkeley Earth in California, a climate-science non-profit organization (see go.nature.com/svbild). The report analysed 4 months of data from more than 1,500 pollution-monitoring sites around China. It found that, on average, 38% of the population breathes air deemed unhealthy by US Environmental Protection Agency standards. The estimate that air pollution kills 1.6 million people in China annually is an increase of 400,000 over previous estimates.

Insect investment Synthetic-biology firm Intrexon announced on 10 August that it will buy Oxitec, a company in Abingdon, UK, that is developing genetically modified insects. The deal is worth US$160 million. Oxitec creates sterile Aedes aegypti mosquitoes, which are released in Brazil to reduce the size of the mosquito population and slow the spread of dengue. Intrexon, in Germantown, Maryland, has also invested heavily in AquaBounty, a biotechnology company in Maynard, Massachusetts, that makes genetically modified salmon.

Genome venture Genome editing continues to attract heavy interest from investors. Editas Medicine, which was founded in 2013 to develop therapies using the gene-editing technique known as CRISPR, announced on 10 August that it had raised US$120 million. Investors in the Cambridge, Massachusetts, company include inventor and philanthropist Bill Gates and Google Ventures, the venture-capital arm of the technology giant in Mountain View, California. The versatility of CRISPR has fuelled optimism about its potential applications in agriculture and medicine. 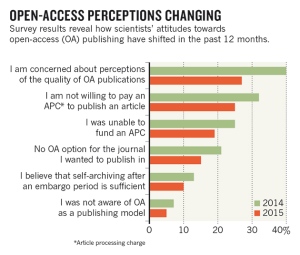 Scientists’ concerns about open-access (OA) publishing might be fading, according to the results of a large Nature Publishing Group survey released on 13 August (see go.nature.com/t2cxrq). The poll found that more than one-third of scientists have not published any OA papers in the past three years, a proportion that has shifted little since 2014. But last year, 40% of those researchers expressed concerns about perceptions of the quality of OA publications; this year, that proportion dropped to 27%.

23–28 August
Eger, Hungary, hosts the world’s microscopists as they gather for the 12th Multinational Congress on Microscopy.
www.mcm2015.com