A smart visualization can transform biologists' understanding of their data. And now that it's possible to sequence every RNA molecule in a cell or fill a hard drive in a day with microscopy images, life scientists are increasingly seeking inventive visual ways of making sense of the glut of raw data that they collect.

Some of the visualizations that are currently exciting biologists were presented at a conference at the European Molecular Biology Laboratory in Heidelberg, Germany, in March. Called Visualizing Biological Data (VIZBI), the meeting was co-organized by Seán O'Donoghue, a bioinformatician at the Garvan Institute of Medical Research in Sydney, Australia. The gathering attracts an eclectic mix of lab researchers, computer scientists and designers and is now in its seventh year.

Here, Nature highlights some of O'Donoghue's picks of the visualizations that are set to transform biology. 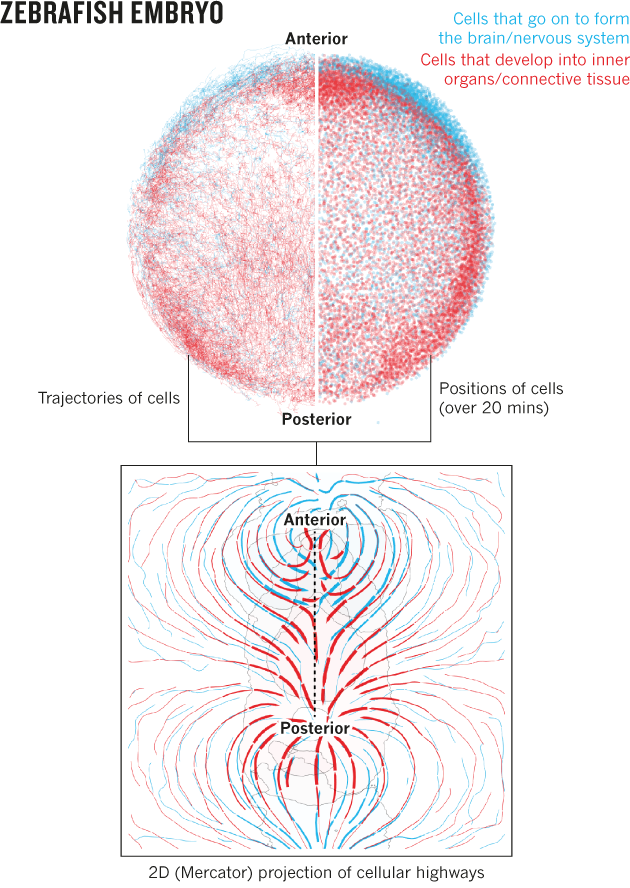 The 'flow' of cells in a developing zebrafish embryo, seen in 3D microscopy data (top) and as a 2D projection (bottom).

Bioinformatics postdoc Nico Scherf watches cells shift paths to form different germ layers and then organs in developing zebrafish embryos using 'light-sheet microscopy' techniques developed by his supervisor at the Max Planck Institute of Molecular Cell Biology and Genetics in Dresden, Germany. But, he says, when tracing the path of every single zebrafish cell, “you end up with a hairball” of tracks. To get some meaning out of these hairballs, Scherf borrowed some fluid-dynamics approaches used to analyse atmospheric and ocean currents. “You only plot the major streamlines, which gives you the highways of cellular motion,” he says. To achieve this, Scherf wrote some software to analyse the images, and will share it with others on request. So far, his approach has revealed that a mutation that causes abnormal organ development alters the movement of cells only very early in zebrafish development. And he thinks that people who are studying the development of other organisms could benefit from getting into the flow of things, too.

Cell interconnections in a Drosophila egg chamber (left) are represented as a 1D network (right).

Jasmin Imran Alsous, a developmental biologist at Princeton University in New Jersey, took inspiration from Picasso when trying to make sense of microscopy images of a fruit fly's egg chamber, a torpedo-shaped cluster that forms when a germ cell goes through four incomplete and asymmetrical divisions. The final result is a network of 16 interconnected cells that constitute both the developing embryo and the surrounding cells that nourish it.

Alsous's adviser had sent her an article about Picasso lithographs that depicted increasingly abstract renderings of a bull. She thought the same principle could apply to depictions of the egg chamber.

She transformed fluorescent microscope images of the chamber into a string of numbers that unambiguously represent how each cell connects to the others. Using this abstraction, she has found that some of the 72 possible configurations of the egg chamber are much more common than others. She is now testing whether the different configurations affect how fruit-fly embryos grow and develop.

A better model of the cell 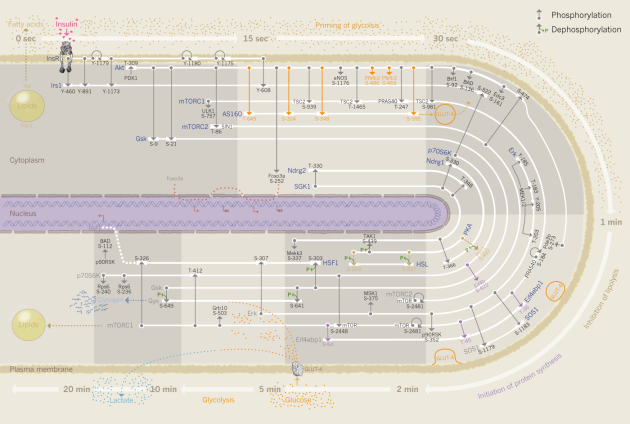 A 'Minardo' chart that visualizes a cascade of protein phosphorylation after a cell is treated with insulin.

O'Donoghue says that his first attempt to visualize how fat cells respond to insulin ended up as a hairball of criss-crossing molecular pathways. A colleague had measured how hundreds of different protein types in a cell are phosphorylated (which tends to activate them) in response to insulin over the course of an hour, when the cell stops burning fat to produce energy and starts bringing in sugars and storing fats.

To tame the hairball, O'Donoghue found inspiration in a famous chart created by the nineteenth-century French civil engineer Charles Joseph Minard. The image charted Napoleon's disastrous invasion of Russia, and integrated six kinds of data — including troop numbers and geography — in two dimensions. O'Donoghue's 'Minardo' chart visualizes an insulin-treated cell like a clock, with consecutive phosphorylation events moving clockwise around the cell. It also depicts a protein's location in a cell and its relationship to other molecular players.

One of the major insights from the visualization, O'Donoghue says, is how quickly the cell responds to insulin, with many changes occurring in the first 15 seconds. “A lot of people in the community were quite shocked by the suddenness.” He is eager for others to use the approach to map other dynamic events, such as the cell cycle, and has created an online guide for doing so. But, for now, he says, “you have to do a lot of manual tweaking”. 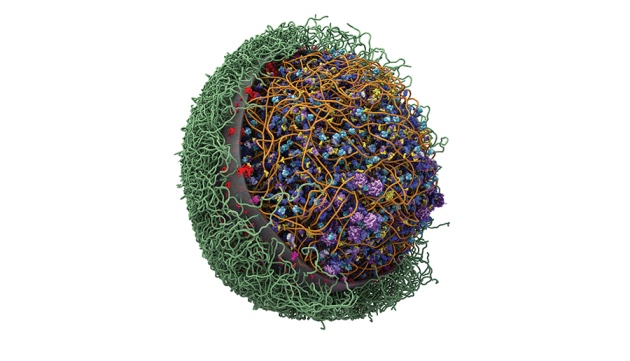 A CellPACK 3D molecular model of a Mycoplasma mycoides cell.

Illustrator Graham Johnson is used to depicting the internal life of cells by hand. Now director of the Animated Cell project at the Allen Institute for Cell Science in Seattle, Washington, Johnson got his start doing illustrations for a cell-biology textbook. “Despite painstaking efforts to be accurate, it was always easy to make mistakes,” he says — particularly when depicting the relative size of cellular components. “When you're creating a visualization, you're establishing what will be the mental model for many current and future biologists,” so accuracy is key, he adds.

To make cellular model-making more systematic, Johnson developed a tool called cellPACK. To use it, researchers use experimental data to create a series of physical rules (a 'recipe') by which defined cellular components such as proteins, lipids and nucleic acids (the 'ingredients') fill a space. Johnson would like to create a platform such that the models are automatically updated when new data are generated. But despite lots of interest from other researchers, most life scientists find that the tool requires too much time and effort to be very practical. “It's months of research to generate a recipe from scratch,” says Johnson, who plans to release a more streamlined web version of the software later this year.

The tool isn't just for making visually striking models, he emphasizes. It can also help scientists to come up with testable hypotheses. His team created a model of the internal structure of HIV and used it to predict how the protein that forms the outer shell interacts with an internal protein. Johnson says that a virologist recently got in touch with him to say his conclusions gleaned from cellPACK checked out experimentally. “He has a bunch of new data, and he wants to work with us to build new models.” 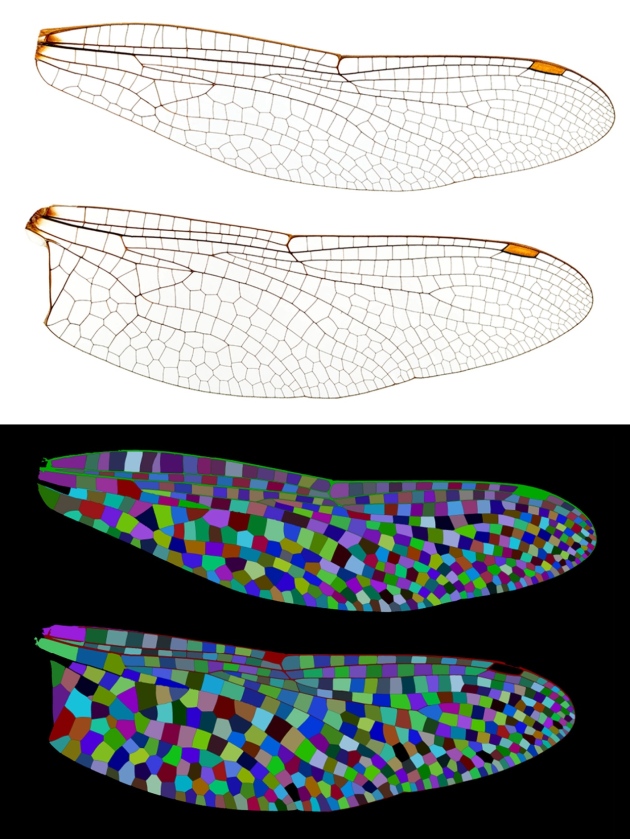 From a high-quality image of a dragonfly wing (top), a computer program picks out the cells (bottom) to measure key traits such as their shape and size — allowing for automated taxonomic classification of species.

Biologists who are studying life at the cellular and molecular level aren’t the only ones with too much data on their hands. By some estimates, more than 80% of the planet’s organisms haven’t been named, and pretty much any taxonomist who goes looking for new forms of life — be it in a tropical rainforest, the ocean floor or a basement herbarium — will find some.

John La Salle, an entomologist at the Commonwealth Scientific and Industrial Research Organisation in Canberra and the director of the Atlas of Living Australia, is among a disparate group of scientists who are employing a 3D modelling technology called computer vision. The software was originally developed with factory robots and Mars rovers in mind and uses digital photographic images of something, such as a beetle or dinosaur bone, to create a digital model. From the 3D models, such as of a dragon-fly wing (see image), a computer can automatically measure traits of a specimen that can be used to determine how the organism is related to other species and to members of the same species.

La Salle’s team is using computer vision to better characterize Australia’s biodiversity. And others are using the technique to digitize the collections of herbaria and natural-history museums. “If our goal is to change the way we discover biodiversity on the planet, we have to go outside the box,” says La Salle.

The CellPACK image shown in an earlier version of this article was erroneously labelled as an HIV-1 particle. Also, the text wrongly implied that Nico Scherf is leader of a cell-biology research group. These have now been corrected.