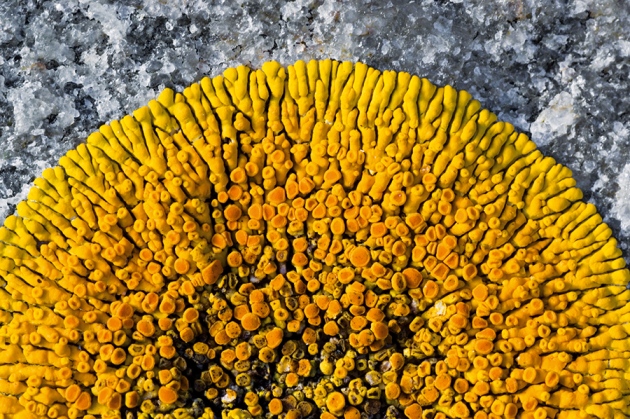 Lichens make acids that react with solid rock in processes that chemists are trying to mimic.

Cristina Mottillo is in no rush. She pours finely ground white powder into a Petri dish, carefully rolls it flat with the side of a small glass vial, then seals it into a chamber where the heat and humidity are like those on a sweltering summer day in the tropics.

Over the next four days, with no further effort from Mottillo, the three chemicals in that powder will gradually turn into ZIF-8: a stable, porous compound called a metal–organic framework that could find widespread use in carbon capture and storage, and that is worth more than 100 times the raw materials' original value. “The reactants do all the work,” says Mottillo, a chemistry PhD student at McGill University in Montreal, Canada.

This is a radical departure from standard chemical-synthesis methods, which typically involve dissolving, heating and stirring ingredients in a solution to encourage them to react quickly. These techniques are fast and well understood, but they tend to consume large amounts of chemicals and energy, and pose a major environmental challenge. An estimated 50–80% of all chemical waste produced by industry and university labs consists of solvents left over from synthesis, separation and purification.

For around two decades, a worldwide 'green chemistry' movement has been trying to find ways to minimize these toxic waste streams. But Mottillo is one of a handful of scientists starting to adopt an approach that is radical even by the movement's standards. Her PhD supervisor, McGill chemist Tomislav Friščić, describes it as “lazy man's chemistry”: let a mix of solid reactants sit around undisturbed while they spontaneously transform themselves. More properly called slow chemistry, or even just ageing, the approach requires few, if any, hazardous solvents and uses minimal energy. If planned properly, it also consumes all the reagents in the mix, so that there is no waste and no need for chemical-intensive purification.

Such processes have been known for millennia: rusting iron is a familiar example, as is the decades-long weathering process that produced the Statue of Liberty's green patina. But only now are scientists starting to understand these processes and learn how to control them to obtain the products they want. In the past decade, research groups have used such techniques to produce valuable products, including organometallic complexes, pharmaceuticals, simple organic compounds and photoluminescent materials. Proponents such as Friščić are hoping to make many more.

“The ultimate goal,” he says, “is really to clean up the chemical manufacturing industry.“

That could take a while: even the most ardent advocates agree that ageing faces an uphill struggle for credibility. Students are taught that good chemistry frequently starts with the right solvent: molecules in solution can react much faster than they otherwise would, because they are free to tumble and collide with one another, which facilitates the making and breaking of bonds. But slow chemistry happens in solids, where, by definition, everything is held rigidly in place. “People tend to think of a stone as a grave for molecules,” says Dario Braga, a solid-state chemist at the University of Bologna, Italy.

But that is not true. Solid-state reactions can take months or years, but they do exist in nature. In Western Australia, deposits of bird guano reacting with copper sulfide minerals in rocks have formed moolooite: an uncommon green copper oxalate mineral. Lichens living on rock often secrete a mixture of simple, weak organic acids that slowly react with minerals to produce complex metal–organic materials, which give the lichens some protection from invasive microorganisms.

Well into the nineteenth century, ageing was used to produce lead white, a pigment that is among the most widely used in art history. Manufacturers placed rolled-up sheets of lead over buckets containing a small amount of vinegar, and then left the buckets on a bed of manure in a shed. The metal would slowly react with water vapour in the air and carbon dioxide from the manure, turning into a white material now known to be a mixture of lead carbonate and lead hydroxide. The vinegar acted as a catalyst, and the decomposing manure kept the shed warm enough for the process to proceed at a reasonable rate. After about three months, the pigment was scraped off, washed and ground into a fine powder. It was used in paintings such as Leonardo da Vinci's Mona Lisa (around 1506) and Johannes Vermeer's Girl with a Pearl Earring (1665).

But the recent surge in slow chemistry has nothing to do with art. One factor has been interest from the pharmaceutical industry, which would like better control over the ageing processes that can slowly degrade drugs in pill form (see ‘Slow, slower, slowest’). Another is that solid-state chemistry is no longer the mystery it once was. Reactions in solids tend to be much more complex than those in liquids, where molecules quickly diffuse into a uniform mixture. Solids are often poorly mixed agglomerations of very different particles, and are riven with cracks and other structural defects, where chemical reactions can take place in different ways and at different rates. But rapid improvements in imaging techniques such as X-ray crystallography, nuclear magnetic resonance scanning and electron microscopy are now giving chemists a better understanding of how those reactions proceed in real time, and what they eventually produce.

Ageing reactions happen on a wide range of timescales.

4 DAYS
• Synthesis of 10 grams of zinc- or cobalt-based metal–organic frameworks.

20 YEARS
• Green patina covers the Statue of Liberty as a result of an oxidation reaction between copper, oxygen and water vapour.

Such insights, in turn, have helped proponents to streamline and improve on natural ageing processes, while countering the perception that ageing is too slow and unpredictable to be of practical use. “It's not slow if you plan in advance,” insists Friščić, whose group is trying to better understand and exploit ageing reactions. Mottillo's experiments in the green synthesis of metal–organic frameworks, for example, are an attempt to accelerate the chemistry between minerals and lichen acids.

Another student in Friščić's group has used a different ageing process to synthesize various metal–organic materials from oxides of main-group metals, transition metals and lanthanides — solids that tend to have very high melting points and low solubility. The researchers found that each metal oxide ages at a different speed1, so they have patented this as a way to isolate the metals from one another: the ageing products are less dense than the oxides, so they will float in an intermediate-density liquid while the remaining oxides sink. Metal oxides, says Friščić, are ideal reagents because they are cheap, safe, widely available and produce only water as a by-product. Other metal salts, such as chlorides or nitrates, produce acids that end up as toxic waste. Furthermore, many metals occur naturally as oxides that have to be leached from ore with strong acids; with ageing, says Friščić, one could bypass that step, and make valuable metal–organic frameworks directly from rocks. He and his team are working on scaling this process up to bring it to the metal extraction and separation industry.

As for speed, says Friščić, “we can get reactivity going if we use a few tricks” — most of them quite straightforward. One is to put the samples in a humid atmosphere: water vapour can migrate through holes in the solid structures, acting as a lubricant to help atoms or molecules inside the solid to diffuse, react or even rearrange into new structures.

Another technique is to increase the temperature to, say, 45 °C — a far cry from the hundreds of degrees typical of industrial reaction vessels, but enough to make the ageing process run faster. “If we were living in India, we could potentially do it outside,” says Mottillo. And a third trick is to do what the lichens cannot, and grind the reactants together into a fine, homogeneous mixture to increase the surface area of the particles, where they touch each other and can react. That is how Mottillo was able to complete her ZIF-8 synthesis in days instead of weeks2.

Braga and his group have used ageing, or vapour digestion as they call it, to make a variety of materials by exposing solid reactants in a vial to solvent vapour. For example, by letting solid copper(i) iodide sit with an organic compound for about a week in water, acetonitrile or toluene vapour, they obtained three new copper-based polymers that glow after exposure to ultraviolet light3. Such compounds could be used in light-emitting diodes and screen displays. But even more important, says Braga, is that copper(I) iodide is notoriously difficult to dissolve in common solvents; vapour digestion offers a way to make it and other insoluble materials more accessible to chemistry.

Braga and Friščić are still not sure exactly what is happening in these reactions. But Dominik Cinčić, an assistant professor at the University of Zagreb, is applying their method to organic synthesis, a branch of chemistry that conventionally relies on energy- and chemical-intensive methods. Cinčić's group has demonstrated4 that vapour digestion can be used to synthesize Schiff bases, small organic molecules containing a carbon–nitrogen double bond. The team's next goal is to use the method in a one-step synthesis of amines: nitrogen-containing organic compounds that are used in many dyes and drugs, and that typically require two or three synthesis steps.

Everyone working on ageing-based synthesis concedes that there is a long way to go. The mechanisms are not yet well understood and there are no good computational models to speed up research. Furthermore, sceptics doubt that the chemical industry can ever do without solvents entirely. Walter Leitner, a green chemist at RWTH Aachen University in Germany, points out that ageing research has had the most success in inorganic synthesis — which has historically had a much smaller environmental impact than organic synthesis, where the most solvents are used. In organic synthesis, he says, the most practical target a green chemist can aim for is to find ways to replace toxic solvents with environmentally benign ones such as water.

Still, such objections have not discouraged Friščić. “Everything you can do in solution, you can do with ageing, and more,” he declares. At the moment, he is exploring the mechanisms behind ageing by monitoring reactions as they happen.