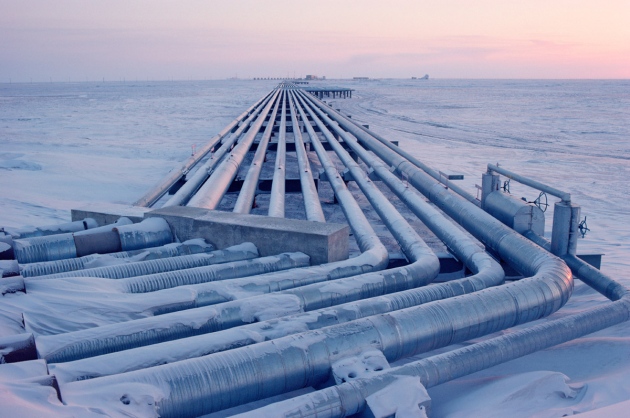 Spills from pipes or rigs in icy areas such as those in Alaska are particularly challenging to clean up.

“The race is on for positions in the new oil provinces.” That starting-gun quote was fired last week by Tim Dodson, executive vice-president of the Norwegian oil and gas company Statoil. The ‘new oil provinces’ are in the Arctic, which brims with untapped resources amounting to 90 billion barrels of oil, up to 50 trillion cubic metres of natural gas and 44 billion barrels of natural gas liquids, according to a 2008 estimate by the US Geological Survey. That’s about 13% of the world’s technically recoverable oil, and up to 30% of its gas — and most of it is offshore.

Oil companies see an opportunity to sate the world’s demand for fossil fuels. Green groups and many scientists, however, are horrified by the prospect of drilling and production in remote, often ice-choked waters, where spills would be harder to control and clean up than in warmer regions. Memories of the devastating environmental impact of the Exxon Valdez accident in 1989 in Alaska’s Prince William Sound are still all too fresh — like the oil that can still be found in the area’s beaches (see Nature http://doi.org/d3gqd2; 2010).

At last week’s Arctic Frontiers conference in Tromsø, Norway, the oil industry insisted that it will be cautious and responsible in extracting oil and gas in the region, and it rolled out an initiative to develop ways of coping with any accidents. Dodson told the meeting that “technology will be there to clean it up”.

Statoil already operates the world’s most northerly liquefied natural-gas production facility near Hammerfest, which draws gas equivalent to about 48,000 barrels of oil a day from the Snøhvit field in the Arctic waters off Norway. By 2020, the company hopes to extract one million barrels of oil equivalent a day from new wells in the Arctic. It is planning exploratory drilling later this year, for example, in the Skrugard and Havis gas fields that were discovered in the Barents Sea last year.

The Norwegian government is happy with Statoil’s bold plans. Norway is currently the world’s second-largest gas exporter, with production continuing to rise, but it is looking to the Arctic to offset a one-third decline in production at its oil fields farther south since 2000. “If we don’t invest, we might lose another third within the next decade,” says Ola Borten Moe, Norway’s minister of petroleum and energy.

On 17 January, Moe awarded 26 production licences for developed offshore oil areas in the Norwegian and Barents Sea to companies including Statoil, Total, ExxonMobil and ConocoPhillips. And the settlement in 2010 of a long-running row between Norway and Russia over their Arctic maritime boundary will allow more exploration in formerly disputed parts of the Barents Sea (see ‘Frozen fuels’). “There’s an ocean of new opportunities that we will grasp with both hands,” says Moe. 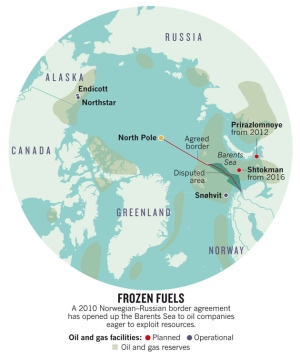 The resource rush is alarming critics. A group of 573 scientists, for example, wrote last week to US President Barack Obama, urging caution in authorizing new oil and gas activity in the Arctic Ocean north of Alaska. The open letter, coordinated by the Pew Environment Group, a conservation organization headquartered in Washington DC, argues that more research is needed to assess the potential impact on the region’s environment and ecosystems before going ahead with more drilling.

The industry holds that Arctic oil and gas development can be done in an environmentally sustainable manner despite the challenges. “We realize that there are huge issues when working in the cold and darkness and in the presence of sea ice in areas at great distance from any infrastructure,” says Joseph Mullin, a London-based programme manager at the International Association of Oil and Gas Producers. Mullin will oversee a four-year, US$20-million research programme to address those issues, launched at the Tromsø conference by nine major oil companies.

The initiative, which is open to academic collaborators, will include research on the environmental effects of Arctic oil spills, spill trajectory modelling and remote sensing, and oil recovery techniques in sea-ice areas. It will also test Arctic clean-up technologies in a number of controlled oil releases. “You’d like to have a variety of spill-response options in the tool box before you venture out there,” says Mullin.

The leading Russian oil and gas companies, Gazprom and Rosneft, have so far stayed clear of the initiative, adding to concerns about their compliance with national and international safety standards.

In December 2011, for example, at least 37 people were killed when an oil rig under contract to Gazprom capsized off Sakhalin Island in Russia’s Arctic Ocean, resulting in a fine for the company.

And according to Vladimir Chuprov, a Moscow-based energy expert who works for Greenpeace, emergency contingency plans for the Prirazlomnoye oil platform in the Russian Barents Sea, where commercial drilling is to start this year, have not been publicly released, despite being required by Russian regulators.

But even companies with better safety records should avoid the Arctic, say Chuprov and other environmentalists. “In our view no company is ready for offshore oil projects in the Arctic Ocean,” he says.