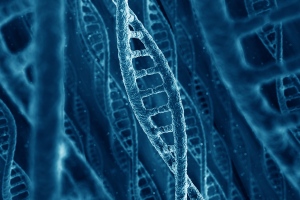 The discovery of super-enhancers follows studies on cancers that are fuelled by an over-active MYC gene.

Cancer cells, stem cells, muscle cells and more may owe their unique identities to powerful gene-regulating structures called super-enhancers, two studies suggest. These structures are long stretches of DNA to which many proteins attach, souping up activity of the genes that they are near.

Different cell types in the body contain the same genetic information but have different genes activated. Short stretches of DNA in the genome called enhancers act like switches for these genes, flipping them 'on' when certain proteins attach to them. Two studies published in Cell now show that enhancers become even more powerful when many of them join together1, 2. Richard Young, a cancer researcher at the Whitehead Institute in Cambridge, Massachusetts, and senior author of both papers, has dubbed these giant groupings super-enhancers.

In the study led by Jakob Lovén at the Whitehead Institute the team looked at cancer cells that owe their out-of-control growth to a notorious gene named MYC1. They found that super-enhancers had formed within the cells near the MYC gene, and that the structures catalysed high production of MYC protein. They also found that the super-enhancers could easily be perturbed, causing MYC protein levels to plummet. The Whitehead Institute's Warren Whyte and his colleagues then went on to show that ordinary, healthy cells also seem to depend on super-enhancers2.

Young says that the fragility of the super-enhancers means that scientists may have a fruitful new way to study cancers. Rather than designing drugs that block MYC — a technique that has thus far been unsuccessful — he suggests that investigators try to hinder the super-enhancer complex that brings MYC to power. (Young is a founder and director of Syros Pharmaceuticals, a new company in Cambridge, Massachusetts, that has announced a US$30-million venture-capital investment aimed at developing new cancer drugs, perhaps based on super-enhancers.)

Young’s teams discovered super-enhancers while pursuing a conundrum. Back in 2011, scientists had reported that blocking a protein called Brd4 in mice with leukaemia would cause the amounts of Myc protein in cancer cells to diminish sharply and stop the cancer cells from proliferating3. But Brd4 is known to help activate enhancers in both healthy and cancerous cells, so how could the Brd4 inhibitors be leaving normal cells unscathed? “I thought, maybe BRD4 does something special to MYC that it does not do to other genes,” says Young.

Last year, a multicentre effort called the Encyclopedia of DNA Elements (ENCODE) reported that it had identified about a million enhancer switches in the human genome. Based on his teams' findings, Young speculates that some of these enhancers act not on their own, but clustered together into large groups. The location and identity of these super-enhancers would differ according to the type of cell, so that the genes that give each cell type its unique identity (such as MYC in a cancer cell) are activated appropriately. “This looks like a very cool biological phenomenon in which a cluster of enhancers seem to function as a unit,” says John Stamatoyannopoulos, a cancer researcher at the University of Washington in Seattle and a lead investigator on the ENCODE project.

Young predicts that learning more about the super-enhancers operating in each cell type will be key to manipulating gene expression within cells without too many side effects, just as was the case for BRD4 and MYC in mice. It would also mean that rather than exploring some 10,000 enhancers operating in a cell, researchers might be able to focus on super-enhancers, the masterminds running the show.