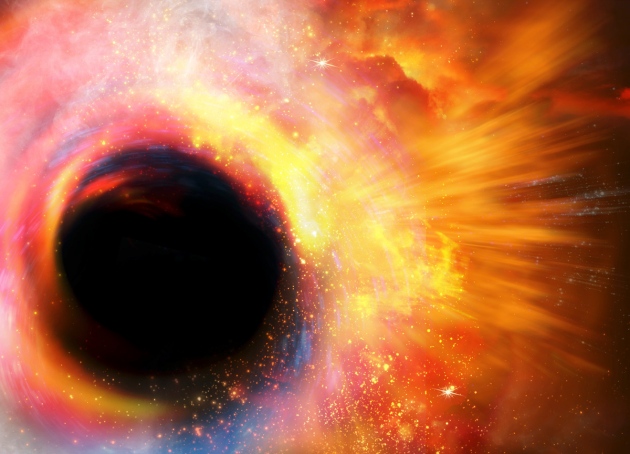 The defining characteristic of a black hole may have to give, if the two pillars of modern physics — general relativity and quantum theory — are both correct.

Most physicists foolhardy enough to write a paper claiming that “there are no black holes” — at least not in the sense we usually imagine — would probably be dismissed as cranks. But when the call to redefine these cosmic crunchers comes from Stephen Hawking, it’s worth taking notice. In a paper posted online, the physicist, based at the University of Cambridge, UK, and one of the creators of modern black-hole theory, does away with the notion of an event horizon, the invisible boundary thought to shroud every black hole, beyond which nothing, not even light, can escape.

“There is no escape from a black hole in classical theory, but quantum theory enables energy and information to escape.”

In its stead, Hawking’s radical proposal is a much more benign “apparent horizon”, which only temporarily holds matter and energy prisoner before eventually releasing them, albeit in a more garbled form.

“There is no escape from a black hole in classical theory,” Hawking told Nature. Quantum theory, however, “enables energy and information to escape from a black hole”. A full explanation of the process, the physicist admits, would require a theory that successfully merges gravity with the other fundamental forces of nature. But that is a goal that has eluded physicists for nearly a century. “The correct treatment,” Hawking says, “remains a mystery.”

Hawking posted his paper on the arXiv preprint server on 22 January1. He titled it, whimsically, 'Information preservation and weather forecasting for black holes', and it has yet to pass peer review. The paper was based on a talk he gave via Skype at a meeting at the Kavli Institute for Theoretical Physics in Santa Barbara, California, in August 2013 (watch video of the talk).

Hawking's new work is an attempt to solve what is known as the black-hole firewall paradox, which has been vexing physicists for almost two years, after it was discovered by theoretical physicist Joseph Polchinski of the Kavli Institute and his colleagues (see 'Astrophysics: Fire in the hole!').

In a thought experiment, the researchers asked what would happen to an astronaut unlucky enough to fall into a black hole. Event horizons are mathematically simple consequences of Einstein's general theory of relativity that were first pointed out by the German astronomer Karl Schwarzschild in a letter he wrote to Einstein in late 1915, less than a month after the publication of the theory. In that picture, physicists had long assumed, the astronaut would happily pass through the event horizon, unaware of his or her impending doom, before gradually being pulled inwards — stretched out along the way, like spaghetti — and eventually crushed at the 'singularity', the black hole’s hypothetical infinitely dense core.

But on analysing the situation in detail, Polchinski’s team came to the startling realization that the laws of quantum mechanics, which govern particles on small scales, change the situation completely. Quantum theory, they said, dictates that the event horizon must actually be transformed into a highly energetic region, or 'firewall', that would burn the astronaut to a crisp.

This was alarming because, although the firewall obeyed quantum rules, it flouted Einstein’s general theory of relativity. According to that theory, someone in free fall should perceive the laws of physics as being identical everywhere in the Universe — whether they are falling into a black hole or floating in empty intergalactic space. As far as Einstein is concerned, the event horizon should be an unremarkable place.

Now Hawking proposes a third, tantalizingly simple, option. Quantum mechanics and general relativity remain intact, but black holes simply do not have an event horizon to catch fire. The key to his claim is that quantum effects around the black hole cause space-time to fluctuate too wildly for a sharp boundary surface to exist.

“The picture Hawking gives sounds reasonable,” says Don Page, a physicist and expert on black holes at the University of Alberta in Edmonton, Canada, who collaborated with Hawking in the 1970s. “You could say that it is radical to propose there’s no event horizon. But these are highly quantum conditions, and there’s ambiguity about what space-time even is, let alone whether there is a definite region that can be marked as an event horizon.”

Although Page accepts Hawking’s proposal that a black hole could exist without an event horizon, he questions whether that alone is enough to get past the firewall paradox. The presence of even an ephemeral apparent horizon, he cautions, could well cause the same problems as does an event horizon.

Unlike the event horizon, the apparent horizon can eventually dissolve. Page notes that Hawking is opening the door to a scenario so extreme “that anything in principle can get out of a black hole”. Although Hawking does not specify in his paper exactly how an apparent horizon would disappear, Page speculates that when it has shrunk to a certain size, at which the effects of both quantum mechanics and gravity combine, it is plausible that it could vanish. At that point, whatever was once trapped within the black hole would be released (although not in good shape).

If Hawking is correct, there could even be no singularity at the core of the black hole. Instead, matter would be only temporarily held behind the apparent horizon, which would gradually move inward owing to the pull of the black hole, but would never quite crunch down to the centre. Information about this matter would not destroyed, but would be highly scrambled so that, as it is released through Hawking radiation, it would be in a vastly different form, making it almost impossible to work out what the swallowed objects once were.

“It would be worse than trying to reconstruct a book that you burned from its ashes,” says Page. In his paper, Hawking compares it to trying to forecast the weather ahead of time: in theory it is possible, but in practice it is too difficult to do with much accuracy.

Polchinski, however, is sceptical that black holes without an event horizon could exist in nature. The kind of violent fluctuations needed to erase it are too rare in the Universe, he says. “In Einstein’s gravity, the black-hole horizon is not so different from any other part of space,” says Polchinski. “We never see space-time fluctuate in our own neighbourhood: it is just too rare on large scales.”

Raphael Bousso, a theoretical physicist at the University of California, Berkeley, and a former student of Hawking's, says that this latest contribution highlights how “abhorrent” physicists find the potential existence of firewalls. However, he is also cautious about Hawking’s solution. “The idea that there are no points from which you cannot escape a black hole is in some ways an even more radical and problematic suggestion than the existence of firewalls,” he says. "But the fact that we’re still discussing such questions 40 years after Hawking’s first papers on black holes and information is testament to their enormous significance."