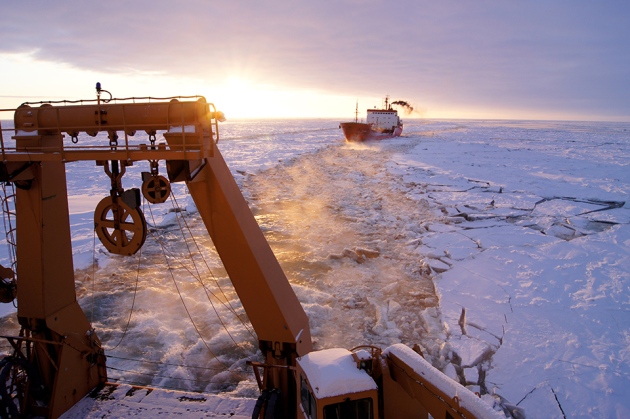 Researchers have found a way to track changes in sea-ice thickness in near real time.

Following a record winter in many ways, Arctic sea-ice cover seems poised to reach one of its smallest winter maxima ever. As of 28 February, ice covered 14.525 million square kilometres, or  938,000 square kilometres less than the 1981–2010 average. And researchers are using a new technique to capture crucial information about the thinning ice pack in near real time, to better forecast future changes.

Short-term weather patterns and long-term climate trends have conspired to create an extraordinary couple of months, even by Arctic standards. “This winter will be the topic of research for many years to come,” says Jennifer Francis, a climate scientist at Rutgers University in New Brunswick, New Jersey. “There’s such an unusual cast of characters on the stage that have never played together before.”

The characters include the El Niño weather pattern that is pumping heat and moisture across the globe, and the Arctic Oscillation, a large-scale climate pattern whose shifts in recent months have pushed warm air northward. Together, they are exacerbating the long-term decline of Arctic sea ice, which has shrunk by an average of 3% each February since satellite records began in 1979.

A persistent ridge of high-pressure air perched off the US West Coast has steered weather systems around drought-stricken California, funnelling warmth northward. As a consequence, sea ice is particularly scarce this year in the Bering Sea. “The ice would normally be extensive and cold, but we have open water instead,” says Francis.

A storm last December compounded the situation by pushing warm air — more than 20 °C above average — to the North Pole. In January, an Arctic Oscillation-driven warm spell heated the air above most of the Arctic Ocean. By February, ice had begun to circulate clockwise around the Arctic basin and out through the Fram Strait, says Julienne Stroeve, a researcher at the US National Snow and Ice Data Center (NSIDC) in Boulder, Colorado.

Given the Arctic’s notoriously unpredictable weather, the low maximum doesn’t necessarily foretell record-low melting this summer, when sea ice will reach its annual minimum. (The biggest summer melt on record happened in 2012, a year without an El Niño.) But researchers have one new tool with which to track the changes as they happen this year — the first detailed, near-real-time estimates of ice thickness, from the European Space Agency’s CryoSat-2 satellite.

Three research groups currently calculate Arctic ice thickness from satellite data, but with a lag time of at least a month. Faster estimates would allow shipping companies to better plot routes through the Arctic, and scientists to improve their longer-term forecasts of ice behaviour. “The quicker you have these estimates of sea-ice thickness, the quicker you can start assimilating them into models and make more timely predictions of what’s going to happen,” says Rachel Tilling, a sea-ice researcher at University College London.

She and her colleagues have developed a faster way to get information on ice thickness from CryoSat-2 (see ‘Measuring stick’). The satellite measures thickness by comparing the time that it takes for radar signals to bounce off the ice, as opposed to open water. Normally, it takes several months for satellite operators to calculate Cryo-Sat-2’s precise orbit (and therefore the exact location of the ice and water that it flew over). But Tilling’s group instead runs a quick-and-dirty analysis of orbital data, then combines it with near-real-time information on ice concentration from the NSIDC and ice type from the Norwegian Meteorological Service (R. L. Tilling et al. Cryosphere Discuss. http://doi.org/bcw5; 2016). 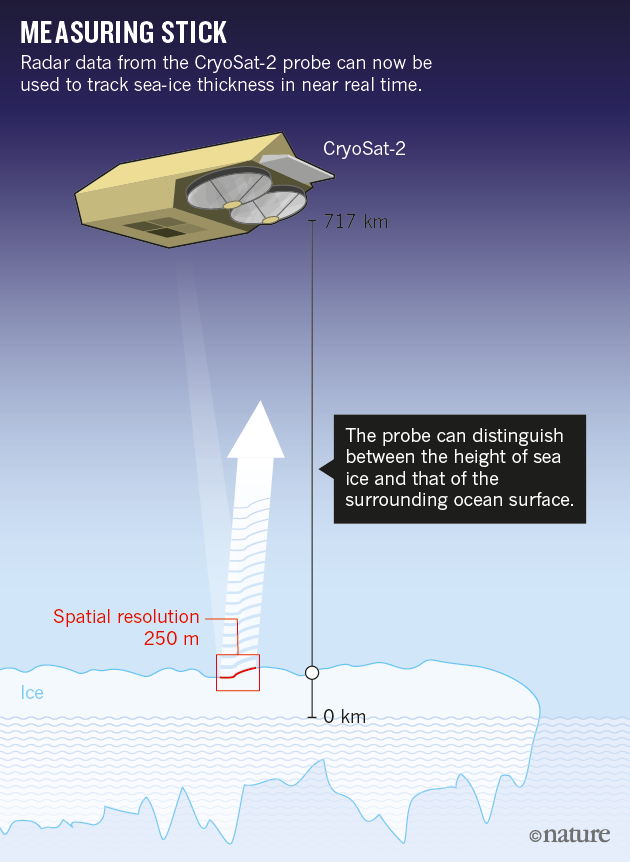 The result is ice-thickness measurements that are ready in just 3 days, and accurate to within 1.5% of those produced months later. The current winter cycle is the first complete season for the near-real-time data. (The measurements cannot be done in the summer, when melt ponds on the ice confuse the satellite.)

Tilling has begun to speak to shipping companies, among others, that are interested in using the data as fast as they are produced. “It really is a new era for CryoSat-2,” she says.

More-accurate ice-thickness data would improve climate models and give better forecasts for the possible impacts of thick or thin sea ice, says Nathan Kurtz, a cryosphere scientist at NASA’s Goddard Space Flight Center in Greenbelt, Maryland. Kurtz helps to lead NASA’s IceBridge project, which will begin flying aeroplanes north of Greenland later this month to measure ice thickness using lasers and an infrared camera that can detect heat from the underlying water.

Thickness measurements are more crucial than ever, given the changing Arctic, says David Barber, a sea-ice specialist at the University of Manitoba in Winnipeg, Canada. He and his colleagues reported last year that there is increased open water all around the edge of the Arctic ice pack every month of the year (D. G. Barber et al. Prog. Oceanogr. 139, 122–150; 2015).

“We’re getting more open water in the winter than we were expecting,” Barber says. “These changes are happening very quickly, and I don’t think people are fully aware of how dramatic they are.”