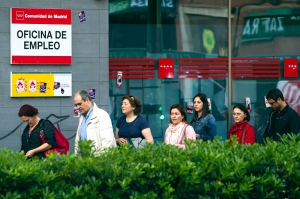 Jobseekers queueing outside an employment office in Spain, where unemployment is at a 37-year high. The government has responded to the economic crisis by slashing its research budget for four consecutive years.

In a document sent to the European Commission on 30 April, the Spanish government camouflaged this year’s cuts to the science budget while downgrading research spending goals for 2020.

“Spending on civilian research, development and innovation has not been curtailed at all,” says the 2013 National Reform Programme, in which the government outlines Spain’s strategy to reduce its deficit and try to overcome the most severe economic crisis in decades. But official data from the government's Spanish Foundation for Science and Technology show the budget on civilian research was slashed by €67 million (US$88 million) in 2013.

The news comes as the country goes through its fourth year of repeated cuts on research and hundreds of young scientists await research grants worth a total of millions of euros, which have been delayed for months.

The 192-page reform programme summarizes Spain’s research plan for 2020. “Research, development and technological innovation are the engine of a sustainable, competitive and high-quality growth model,” says the document sent to Brussels. But it downgrades Spain’s goal for research spending by 2020 from 3% of the country’s gross domestic product (GDP) to 2%. The revision, the document says, is a result of the country’s “current macroeconomic situation” and “the need to accomplish the deficit goals”. The cut was already planned in official documents published earlier this year.

The reform programme says that Spain currently spends 1.4% of GDP on research, and that the country will meet the 2% objective by boosting private spending from the current 0.6% of GDP to 1.2% in 2020. But this will require a substantial change from current trends: the private sector’s share of Spanish research spending has fallen by almost 4 points since 2004, according to the Organisation for Economic Co-operation and Development in Paris.

The main drivers of Spain’s planned private-spending boost would be new public–private financing research programmes and extra tax benefits for companies spending on research and development, which will be included in an entrepreneurship law that the government is preparing, but have yet to be specified.

The government plans to reduce public funding's share of total research spending from the current 45.5% to 41.4% in 2016, according to its national research plan for 2013–16, which was approved earlier this year. The decrease will be partially compensated by competitive public funding coming mainly from the European Union, which the government wants to push up from current levels (5.7% of total Spanish research spending in 2010) to 15% in 2020, according to Spain’s science, technology and innovation strategy for 2013–20.

“One has just to go through the official numbers to see the government is not saying the truth”, says Carlos Andradas, president of the Confederation of Spanish Scientific Societies. “We are sceptical of the planned increase in private research spending because such an increment has not been seen in Spain even during the best times of economic upturn,” he adds. By contrast, “we fear the contraction of public spending will be executed to its full extent”.

Isabel García, general secretary of the Spanish Bioindustry Association in Madrid, is concerned about the government’s plan for private research spending. “Companies investing in innovation are facing great difficulties in accessing credit,” she says. “2011 was the first time that the Spanish biotechnology sector reduced its spending on research and development.”

The reform plan has also angered the Spanish Socialist Workers' Party, Spain’s main political opposition force. The party, which is pushing its own reform programme, says that the government’s plans to “freeze” public spending on research are “unacceptable” and that downgrading research spending goals amounts to “political blindness”.

A spokesman for the Secretary of State for research, development and innovation acknowledges the €67 million cuts to the 2013 research budget. He says that the statement in the document sent to the European Commission is "not wrong", but that "maybe it should have said the research budget has been slightly reduced, or that the reduction has been minimized in comparison to other areas, as the reform plan says in introductory paragraphs".