Drug spending For the first time in more than two decades, the US public’s spending on ‘traditional’ prescription drugs — therapies for common conditions such as raised cholesterol or high blood pressure — declined in 2012, according to a 5 March report by Express Scripts, a company in St Louis, Missouri, that manages pharmacy services. But the 1.5% drop in traditional prescription medications was more than offset by an 18.4% surge in spending for drugs that are used to treat complex diseases such as cancer and rheumatoid arthritis, and that often require special handling. Overall, US drug spending increased by 2.7%. 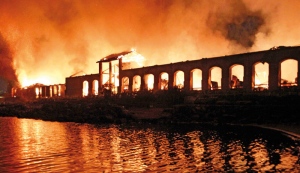 Rebuilding Naples’ City of Science The Italian government has pledged €20 million (US$26 million) to help rebuild the City of Science (Città della Scienza), an iconic 12,000-square-metre exhibition centre and science museum in Naples that was destroyed by fire on 4 March (pictured). Italy’s research minister, Francesco Profumo, said that the government would work with local authorities on a plan to rebuild the museum in just 18 months. The museum’s management is also seeking voluntary donations. Investigators had not announced an official cause for the fire as Nature went to press, but they were reported by the Italian media to suspect arson.

Life in Lake Vostok Russian scientists say that they have found a hitherto-unknown type of bacterium in Antarctica’s largest subglacial lake. Samples retrieved last year from Lake Vostok contain an “unclassified” bacterium whose DNA is less than 86% similar to known bacteria, Sergey Bulat of the Petersburg Nuclear Physics Institute in Gatchina announced at a meeting last week in Moscow. More tests and cleaner samples are needed to establish the physiology and biochemistry of the microbe, says Bulat. See go.nature.com/ydcmw4 for more.

Carbon spike Atmospheric carbon dioxide concentrations rose by 2.59 parts per million (p.p.m.) in 2012, marking the sharpest increase since 1998, according to data from the US National Oceanic and Atmospheric Administration. Atmospheric CO2 concentrations reflect rising global emissions, driven by developing countries, as well as variations in carbon uptake by plants and the oceans. The global average, calculated from measurements at the Mauna Loa Observatory in Hawaii and other locations, exceeded 395 p.p.m. in January, representing an increase of 41% from pre-industrial levels.

Anti-HIV trial A clinical trial of the preventive powers of the anti-HIV drug tenofovir may have failed because women were not actually taking the drug. In 2011, the VOICE study, in 5,029 HIV-negative women in South Africa, Zimbabwe and Uganda, suggested that neither a vaginal gel nor tablets containing the drug could prevent HIV infection (see Nature 480, 10–11; 2011). Even though little unused product was returned, tenofovir was present in fewer than one-third of biological samples from participants assigned to receive it, study leaders revealed last week. Too few women took the drug to assess whether it did prevent HIV infection, although earlier studies have suggested it can work.

Elephant poaching A surge in ivory poaching has driven the population of African forest elephants down to less than 10% of what could be supported by the available range. Researchers calculate that this species (Loxodonta africana cyclotis) lost 30% of its range and 62% of its population between 2002 and 2011 (F. Maisels et al. PLoS ONE 8, e59469; 2013). The study was released as the Convention on International Trade in Endangered Species of Wild Fauna and Flora (CITES) met in Bangkok; many scientists have urged CITES to clamp down on poaching and habitat destruction and to tackle demand for ivory (see Nature 494, 411–412; 2013).

Standard Higgs The new particle discovered last year at CERN’s Large Hadron Collider outside Geneva continues to behave just like the Higgs boson predicted by the standard model of particle physics, according to results presented last week at a conference in La Thuile, Italy. The latest data indicate that the boson decays into τ leptons as predicted, and also dampen earlier hints that the boson decays into pairs of photons more often than the standard model allows. No evidence yet points to theories beyond the standard model, such as supersymmetry (see Nature 491, 505–506; 2012). 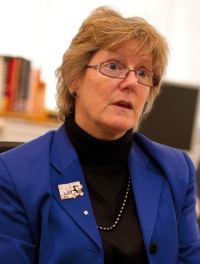 Antibiotic warning The British government’s leading medical adviser said on 11 March that bacteria that are resistant to antibiotics should be placed alongside pandemic influenza and terrorism on the list of national security threats. Sally Davies, England’s chief medical officer (pictured), called for more international research into new antibiotics and better surveillance of resistant microbes, in a report that charts the increase in drug-resistant bacterial infections. See go.nature.com/2u9ofh for more.

Trading species Polar bears (Ursus maritimus) will not be given increased protection under the Convention on International Trade in Endangered Species of Wild Fauna and Flora (CITES), but it looks increasingly likely that several species of shark will. Delegates meeting in Bangkok for the sixteenth CITES conference, which governs the trade in many animals and plants, voted against banning the trading of polar-bear parts. But a committee vote — which still has to be approved by the whole conference — did approve a need for export permits to protect oceanic whitetip (Carcharhinus longimanus), porbeagle (Lamna nasus) and other species of shark.

Quake appeal Six scientists and a government official who were found guilty of manslaughter after the 2009 earthquake in the city of L’Aquila, Italy, have all filed appeals against the verdict in time for a 6 March deadline. Last October, a prosecutor sentenced each of the seven men to six years in prison, arguing that their reassurances led to the wrong messages being given to the public, adding to the death count in the earthquake (see Nature 490, 446; 2012). Their sentences are suspended pending the outcome of the appeal. See go.nature.com/vny9un for more.

Cancer strategy To fight the growing global burden of cancer, countries must boost research and develop national control plans for the condition, says a panel of experts from 15 countries. The report, published on 6 March (H. Varmus and H. S. Kumar Sci. Transl. Med. 5, 175cm2; 2013), calls for a series of efforts including increased funding for cancer-prevention research, harmonization of international clinical-trial practices and global standards for biomedical research. The report’s recommendations were the culmination of two meetings, the last in November 2012, of representatives from organizations that fund or conduct research. See go.nature.com/pxhoto for more.

Pasteur head Christian Bréchot was on 8 March appointed the next director-general of the Pasteur Institute in Paris. Bréchot, currently vice-president for medical and scientific affairs at the Mérieux Institute in Lyons, was a former head of INSERM, the French national biomedical agency, but resigned in 2007 in relation to a legal case involving a cancer diagnostics firm that he and his wife had founded (see Nature 449, 760–761; 2007). Bréchot succeeds Alice Dautry, who got the Pasteur Institute back on track after her predecessor had been evicted amid bitter staff disputes. Dautry had served the maximum two terms in office; Bréchot begins a four-year term on 1 October. 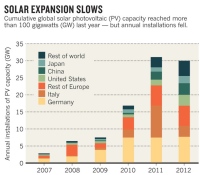 New connections of solar photovoltaic systems to the electricity grid fell in Europe for the first time last year, to 16.6 gigawatts (GW; see chart). Government withdrawals of solar subsidies helped to drive notable drops in Spain and Italy. But the non-European market expanded much faster, to more than 13 GW, meaning that the global total for 2012 reached 30 GW — not quite as much as in 2011, according to preliminary figures from the European Photovoltaic Industry Association in Brussels.

20 March
The next winner of the US$3-million Fundamental Physics Prize is announced at CERN in Geneva, Switzerland.
go.nature.com/lr7hht

18–22 March
Results from the Mars Curiosity rover and the GRAIL mission to map the Moon’s gravity are released at the Lunar and Planetary Science Conference in The Woodlands, Texas.
go.nature.com/eab6yw

The story ‘Carbon spike’ gave the wrong figure for the percentage increase in atmospheric CO2 concentration. The global average of 395 p.p.m. represents a 41% increase from pre-industrial levels, not 70% as originally stated. The text has been corrected to reflect this.