POLICY
Avian-flu review In the light of fresh data about two unpublished studies that created ferret-transmissible versions of the avian H5N1 flu virus, the US National Institutes of Health (NIH) has told the National Science Advisory Board for Biosecurity to reconsider the fate of the manuscripts. The board had asked that the research be censored, but flu researchers wanted the work published in full. At a public meeting on 29 February, Anthony Fauci, who heads the NIH's National Institute of Allergy and Infectious Diseases, said he wanted the panel to think again. It has become clear, for example, that ferrets did not die when infected through aerosol transmission. See go.nature.com/wj4ce9 for more.

North Korea talks North Korea has agreed to suspend nuclear testing, uranium enrichment and development of long-range ballistic missiles in exchange for food aid from the United States. The agreement, announced on 29 February, also allows inspectors from the International Atomic Energy Agency to enter the country's Yongbyon nuclear complex for the first time in more than three years. The diplomatic breakthrough is the first major international political deal made by North Korea's new leader, Kim Jong-un. See go.nature.com/3epxya for more.

China budget boost China's central government plans to increase spending on science and technology by 12.4% compared with last year's budget proposal, to 229 billion renminbi (US$36.2 billion), according to a draft budget announced on 5 March at the annual meeting of China's top legislature, the National People's Congress. That rise was slightly smaller than the overall budget increase (14.1%), but the country's main basic-science funding agency, the National Natural Science Foundation, saw a 26% boost to 32.5 billion renminbi, and the budget earmarked for agricultural science and technology jumped by 53%, to 10.1 billion renminbi.

Primate-hub woes The death of a cotton tamarin monkey at Harvard's New England Primate Research Center — the facility's third monkey death in six months — has led to the suspension of all new experiments and the resignation of interim director Fred Wang. Wang said on 2 March that he was stepping down “for personal and professional reasons”. The centre, which houses roughly 2,000 monkeys, is based in Scarborough, Massachusetts, and receives about US$25 million a year from the National Institutes of Health. It conducts research on conditions such as AIDS, Parkinson's disease and cancer.

Genetic tests online The US National Institutes of Health (NIH) has unveiled its Genetic Testing Registry, an online resource for information on genetic tests. The NIH says that genetic tests are now available for some 2,500 diseases, and some can be purchased directly from the providers. The information in the registry, launched on 29 February, is voluntarily provided by test producers, and is not independently verified by the NIH. See go.nature.com/zrk56v for more. 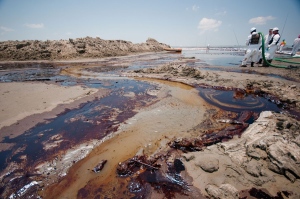 EVENTS
The cost of the Gulf of Mexico oil spill Oil company BP has agreed to pay about US$7.8 billion to settle claims for damages from an estimated 116,000 businesses and individuals affected by the 2010 oil spill in the Gulf of Mexico (pictured). The deal, outlined on 3 March, brings the firm's total spend on the oil spill to some $30 billion; it made $23.9 billion in profits last year. BP does not think that, in total, it will spend more than the $37.2 billion already set aside for oil-spill costs — but that depends on the extent of pollution claims (and possible criminal charges) from the US government.

RESEARCH
Diesel cancer link After almost two decades of legal and political wrangling, US government researchers have published research showing how exposure to diesel exhaust increases the risk of lung cancer. Although it is not a surprising finding, the prolonged legal battle over the study's data, which were contested by an industry coalition, attracted wide attention. An appeals-court ruling paved the way for final publication on 5 March. In June, international regulatory agencies will meet to reassess the carcinogenic effects of diesel exhaust. See go.nature.com/hickkz for more.

Exoplanet update NASA's Kepler team on 2 March publicized the data for 1,091 signals that may represent extrasolar planets — bringing the total public catalogue to 2,321 candidates discovered during the mission's first 16 months of operation. With the rate of false positives estimated to be less than 10%, these candidates will bolster the database of 760 exoplanets confirmed so far. Some 246 of the Kepler candidates are Earth-sized.

Safer water supplies More than 2 billion people gained access to improved sources of drinking water (such as piped water or protected wells) between 1990 and 2010, says a report released by the World Health Organization and the United Nations Children's Fund (UNICEF) on 6 March. The report says that half of a Millennium Development Goal has been reached (the full goal is to halve from 1990 levels the proportion of people without sustainable access to safe drinking water and basic sanitation). But many 'improved' water sources might not actually be safe or sustainable, the report acknowledged.

Ghostwriting row Two psychiatrists accused last July of putting their names to a 2001 paper that they did not write have been cleared by their institution, the University of Pennsylvania in Philadelphia. The paper was about the antidepressant Paxil (paroxetine), made by the drug giant GlaxoSmithKline. The university says that there is no merit to the misconduct allegations and adds that although the authors had failed to acknowledge the assistance of a medical writing company, current rules that forbid this practice were not in place then. The US Office of Research Integrity, which oversees US Public Health Service agencies and grant recipients, says that it is still considering the matter. See go.nature.com/j2gglf for more. 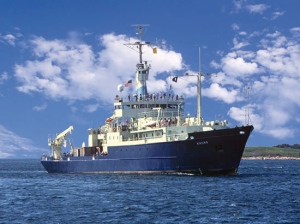 FUNDING
US research ships The US Navy says that it has finalized contracts for two new ocean-class research vessels. The ships, costing a total of around US$145 million, are set to launch in 2014 and 2015. One will be operated by the Scripps Institution of Oceanography in La Jolla, California, and the other by the Woods Hole Oceanographic Institution in Massachusetts. They will replace Scripps' RV Melville and Woods Hole's RV Knorr (pictured) — both larger vessels that were launched in 1968 and will be decommissioned. See go.nature.com/pdslvy for more.

PEOPLE
Bioethics conflict A bioethicist who remained editor-in-chief of a high-impact bioethics journal while working for a controversial stem-cell firm resigned his industry position on 28 February, after criticism from his peers about conflicts of interest. Glenn McGee, who founded the American Journal of Bioethics, had been working with Celltex Therapeutics in Houston, Texas, since December 2011 as president for ethics and strategic initiatives. McGee resigned his editorship in February, but Celltex has been mired in controversy owing to evidence that it is involved in the clinical use of unproven stem-cell treatments in the United States. See go.nature.com/angubk for more.

Mann hunt over Virginia's supreme court threw out an investigation into climate scientist Michael Mann on 2 March. The state's attorney general, Ken Cuccinelli, had spent almost two years demanding that the University of Virginia in Charlottesville, where Mann once worked, provide him with documentation including the researcher's e-mail records, following the controversy that surrounded climate e-mails leaked from the University of East Anglia in Norwich, UK. Mann, now at Pennsylvania State University in University Park, still faces a separate lawsuit over access to his e-mails, filed by the conservative American Tradition Institute, based in Washington DC. See go.nature.com/xj5czz for more. 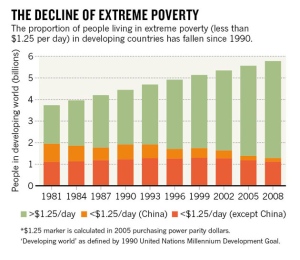 TREND WATCH
The developing world has met the United Nations' first Millennium Development Goal, to halve extreme poverty from 1990 levels by 2015, the World Bank said on 29 February on the basis of preliminary 2010 data. By 2008, some 1.3 billion people (22% of the developing world's population) were living on less than $1.25 per day, down from nearly 2 billion (43%) in 1990, said the organization, in Washington DC. The trend has continued to 2010, although much of the fall is due to China's growing wealth.

COMING UP
11 March
Japan commemorates the first anniversary of the earthquake and tsunami that struck the country in 2011. See page 137 for more.